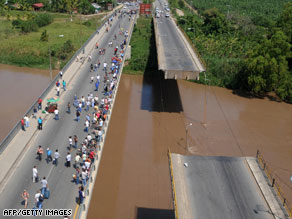 Thursday's quake leaves part of a bridge damaged over the Ulua River in El Progreso, Honduras.

Another 17 people were injured, said Jose Reyes, a spokesman for COPECO, the Honduran government agency that responds to natural disasters. Two of the victims -- a 15-year-old boy and a 2-year-old girl from Morazan -- died after a wall collapsed on them, Reyes said, adding that trauma was blamed for most of the fatalities.

A 9-year-old boy died, and a heart attack proved fatal to a man from Tela, Honduras, the agency said. A woman suffered cardiac arrest.

Watch how the quake damaged a bridge »

Zelaya said the June 2-3 meeting of the Organization of American States will be held as planned in nearby San Pedro Sula, where he said one building had been damaged by the quake.

The earthquake was centered, according to the U.S. Geological Survey, 27 miles (43 km) from Roatan, the largest of Honduras' Bay Islands and a popular destination for scuba diving and snorkeling.

The area -- known for its white-sand beaches, clear waters and rich ocean reef -- is popular among budget-conscious travelers.

"People were startled. They started walking, running, doing everything they could to get to higher ground about two miles away," said Ron Cummins, who owns a resort there.

"I have been on the island for 14 years, this is the worst I have seen."iReport.com: Did you feel the quake? Share photos, video

Ressie Bodden Saphrey said she was sleeping when her house started shaking.

"There was dark everywhere," said Saphrey, who works at a hotel in Roatan. Dishes and bottles crashed to the floor, she said.

She and her 19-year-old daughter packed their passports, medicine, bottled water, canned food and a flashlight in case they were told to evacuate.

They stayed inside their concrete three-story house, though many people in Roatan wandered the streets in the darkness, she said.

The Honduras disaster-response agency urged people to safeguard any important documents, and store food and water they could take in a hurry, according to Channel 8.

Carol Frazier, who was vacationing in Roatan, said the quake knocked out power in her condominium and spilled water from the swimming pool.

"Everything was moving. The TV fell on the ground," she said. "The difficulty was we couldn't even move.

"I really thought it was a tsunami or something. That was really our first concern," she said. "We ran out."

Ron Bobbette, who manages a hotel in West End Roatan, said power had been restored in most places and panic was subsiding.

"Everything is back to normal," Bobbette said. "I just finished walking around the hotel and there is no visible structural damage."

All About Earthquakes • Honduras