PARIS, France (CNN) -- Friends and relatives of the 216 passengers and 12 crew members on Air France Flight 447 are coming to terms with the news that wreckage from the flight was found in the Atlantic Ocean. 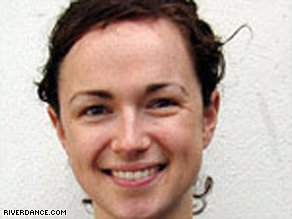 Eithne Walls, who danced with Riverdance on Broadway, was aboard Air France flight 447.

Among those on board were a member of Brazil's former royal family, a one-time performer with the Riverdance troupe, a Rio city official, executives from major international companies and an 11-year-old British schoolboy.

Pedro Luis de Orleans e Braganca, 26, was a descendant of the family that ruled Brazil until 1889, a branch of the former Portuguese royal family. The Orleans and Braganca family considered him to be fourth in line to the throne. Pedro Luis was the oldest son of Prince Antonio and Princess Christine, the family said. He was the only member of the family on the flight, his relatives said.

Eithne Walls, who danced with Riverdance on Broadway, was also on the plane, said Julian Erskine, senior executive producer of the troupe.

"I never saw her without a smile on her face," Erskine said in a statement. "It is hard to believe that such a bright light could be quenched so early and while burning so brilliantly."

She joined the Irish dance troupe in 1998 and performed with them for most of a decade, studying medicine at the same time, Erskine said.

"Anyone who traveled with Eithne will remember the medical books always on the go and her constant attention to her studies," he said. "Without doubt she was someone with a rich future stretching out ahead of her."

The wife one passenger said Tuesday she was only beginning to come to grips with the likelihood that he is dead.

"I have to say, maybe today I'm realizing he might not come back," Patricia Coakley told a reporter about her husband, Arthur.

The structural engineer and designer had completed a business trip to Rio de Janeiro, Brazil, and was flying to Paris, France, on his way back to their home in Whitby, North Yorkshire, near England's northeast coast.

Coakley said her husband hated his cell phones and usually left them switched off. "But yesterday it was ringing, so maybe they're not at the bottom of the sea. That's my hope. But I think it's maybe fading today."

He had originally planned to return home on May 19, but his boss asked him to stay in Brazil until Sunday, she said.

In a telephone call he told her he was excited about returning to see their three children and their plans to go on vacation Friday to the Greek island of Corfu, she said. "All his stuff's ready should he turn up," she added.

"We had so many plans, and they've taken it all away, haven't they?" she asked rhetorically, without identifying "they." "God wouldn't be so cruel."

She described her husband as a religious man. "It used to drive me mad. He used to read the Bible every night. And if he thought he was going to get pissed [drunk], he used to read it before he left the house."

The two loved to travel, and he would ask her, "Where should we go next, darling?" she recalled. But they had been based in England for 25 years to give their children a sense of stability, she said.

"His priority was sea view and mine was trees and we found it," she said, pointing to both, her eyes welling. "It was just going to be repainted next week."

Thinking about the moment when an apparent catastrophic failure caused the jet and its 228 occupants to plunge into the ocean, she said, "I hope Art was asleep and I hope he wasn't frightened."

"I know if he was awake, he would have been thinking of us."

The passengers on Flight 447 also included Marcelo Parente, chief of staff in the office of Rio de Janeiro's mayor.

Two executives of Michelin, one of the world's leading tire manufacturers, also were aboard the plane, a Michelin spokeswoman said. They were Luiz Roberto Anastacio, president of Michelin Latin America, and Antonio Gueiros, another top regional executive. Michelin employee Christine Pieraerts was also among the passengers, the company said. The spokeswoman said that Michelin was saddened by the tragedy.

Alexander Bjoroy, 11, was on his way home to England after a vacation in Brazil, the headmaster of his school said.

He was a "well-liked and respected boarder who will be sorely missed by his fellow pupils and staff," said John Milne, the head of Clifton College Preparatory School in Bristol, England.

Milne expressed the school's "deepest sympathies" to the boy's family.

The passengers included 61 people from France, 58 Brazilians, 26 Germans and people from 29 other countries, Air France said.

An official list of victims by name was not available early Tuesday, but two Americans -- Michael Harris, 60, and his wife, Anne, 54 -- were identified by the couple's family and his employer.

"Anne and Mike were indeed a beautiful couple inside and out, and I miss them terribly already," said Anne Harris' sister, Mary Miley.

Michael Harris was a geologist in Rio de Janeiro for Devon Energy, a U.S.-based natural gas and oil producer, according to a company spokesman.

The Harrises were traveling to Paris for a training seminar and vacation, Miley said.