PARIS, France (CNN) -- There should be no assumed link between on-board speed sensors and the crash of Air France Flight 447 into the Atlantic Ocean last week, the airline's chief executive said Thursday. 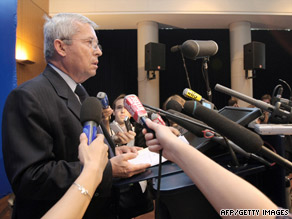 "I am not convinced that the sensors are the cause of the accident," said Air France Chief Executive Pierre-Henri Gourgeon.

Still, he said, the airline will continue with a program, begun just days before the crash, to replace the sensors on its Airbus A330s, the same type of plane that crashed June 1.

The sensors on the doomed plane hadn't yet been replaced, he said.

"Airbus and the European Aviation Safety Agency maintain that the A330/A340s are safe with any one of the three types of existing sensors," Gourgeon told reporters in France.

Air France has promised that no Airbus A330 or A340 will take off unless at least two of its three Pitot tubes have been replaced. The tubes are an instrument contained in the speed-sensing system.

Gourgeon cautioned journalists that "as for the assumptions made by some of the media, they are pure speculation." He did not elaborate.

On Wednesday, a French newsmagazine reported that two of the passengers on the flight had names linked to Islamic terrorism.

L'Express said identification of the two people was not complete because French intelligence services did not yet have their birthdates. The names, L'Express also said, could also be "simple homonyms."

An official with the FBI's Terrorist Screening Center said the names are not on any U.S. watch lists.

"We have no information that would confirm people on our consolidated watch list were on that Air France flight, at least not as of right now. We could always receive additional information," the official said. "There's nothing to suggest at this point that there were people on the flight we were keeping an eye on."

Terrorism has not been ruled out as a possible cause of the crash.

Investigating the crash, which killed all 228 people aboard, will be "long and difficult" given the location in the sea, hundreds of miles off the coast of Brazil.

Flight 447 had been flying from Rio de Janeiro, Brazil, to Charles de Gaulle Airport in Paris, France, when it went down in stormy weather.

"Analysis of the initial results of the searches being carried out may give us an indication of the circumstances of the catastrophe," Gourgeon told reporters. "Various scenarios could then be built by the experts. In addition to which, we hope to recover the flight recorders."

The flight recorders from Flight 447 are now the subject of a massive international search because they could hold the answer to the cause of the crash.

A French nuclear submarine and other vessels now searching for the recorders are focusing on its underwater locator beacon -- a device that sends acoustic pulses, or "pings," to searchers.

The U.S. Navy is contributing two high-tech acoustic devices to locate the pings that will be attached to French tug boats and can search to a maximum depth of 20,000 feet (6,100 meters).

While the wreckage is believed to be about 15,000 feet (4,600 meters) deep, amid underwater mountains and mixed in with tons of sea trash, experts have said they are confident the recorders can be found.

Airspeed sensors like those on the downed plane are susceptible to icing in high-altitude storms. They can affect the stability of an aircraft, particularly if it is on autopilot; one wrong reading can make the autopilot shift the plane into a wrong direction or wrong speed.

Interpol, the international police organization, said Tuesday it is helping to coordinate efforts by a number of countries to identify the crash victims, who came from 32 countries.

"In any major tragedy, a coordinated effort by the international community will significantly speed up the victim recovery and identification process and Interpol is uniquely placed to provide this support to each of our member countries involved," Secretary-General Ronald Noble said.