After 7 years at Gitmo, resettled Uyghurs grateful for freedom

HAMILTON, Bermuda (CNN) -- Two of four Uyghurs relocated to Bermuda after seven years of detention in Guantanamo Bay, Cuba, denied Friday that they had ever been terrorists and expressed gratitude toward U.S. President Barack Obama for working to free them. 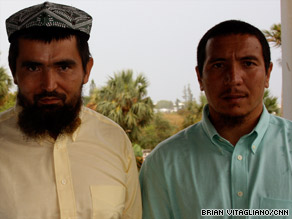 Salahidin Abdalahut and Kheleel Mamut were two of four Uyghurs released from Gitmo. Thirteen remain there.

Asked what he would say to someone who accused him of being a terrorist, one of the men, Kheleel Mamut, told CNN's Don Lemon, "I am no terrorist; I have not been terrorist. I will never be terrorist. I am a peaceful person."

Speaking through an interpreter who is herself a Uyghur who said she was sympathetic toward the men, the other man -- Salahidin Abdalahut -- described the past seven years as "difficult times for me ... I feel bad that it took so long for me to be free."

The two Chinese Muslims were among four relocated from Guantanamo to Bermuda; another 13 remain in detention on the island.

He said he had traveled to Afghanistan not to attend any terrorist training camps but because -- as a Uyghur -- he had been oppressed by the Chinese government. "We had to leave the country to look for a better life, a peaceful life, and Afghanistan is a neighboring country to our country, and it's easy to go," he said. "It is difficult to obtain a visa to go to any other places, so it was really easy for us to just travel to Afghanistan."

Asked what he hoped to do next, he said, "I want to forget about the past and move on to a peaceful life in the future."

In addition to the four relocated from Guantanamo to Bermuda, another 13 Uyghurs remain in detention on the island.

The four were flown by private plane Wednesday night from Cuba to Bermuda, and were accompanied by U.S. and Bermudian representatives as well as their attorneys, according to Susan Baker Manning, part of the men's legal team.

The men, who are staying in an apartment, are free to roam about the island.

Mamut accused the Bush administration of having held them without cause, and lauded Obama for having "tried really hard to bring justice and he has been trying very hard to find other countries to resettle us and finally he freed us."

He appealed to Obama to carry out his promise to shut Guantanamo Bay within a year. "I would like President Obama to honor that word and to free my 13 brothers who were left behind and all of the rest of the people who deserve to be free," Mamut said.

Asked how he had been treated in Guantanamo Bay, Mamut said, "It is a jail, so there will be difficulties in the jail that we have faced and now, since I am a free man today, I would like to forget about all that. I really don't want to think about those days."

He cited a proverb from his homeland that means, "What is done cannot be undone."

Asked if he had anything to say to anyone watching, he said, "Thank you very much for those people who helped me to gain freedom."

He said he had spoken earlier in the day with his family. "They told me, "My boy, my son, congratulations on your freedom.' "

The move has had international repercussions, including causing a rift between the United States and Britain.

A British official familiar with the agreement but not authorized to speak publicly on the matter told CNN the United States had informed London of the agreement "shortly before the deal was concluded."

Bermuda is a British "overseas territory."

The issue of where they go is controversial because of China's opposition to the Uyghurs' being sent to any country but China.

Uyghurs are a Muslim minority from the Xinjiang province of far west China. The 17 Uyghurs had left China and made their way to Afghanistan, where they settled in a camp with other Uyghurs opposed to the Chinese government, the Justice Department said in its statement.

However, China alleges that the men are part of the East Turkestan Islamic Movement -- a group the U.S. State Department considers a terrorist organization -- that operates in the Xinjiang region. East Turkestan is another name for Xinjiang.

China on Thursday urged the United States to hand over all 17 of the Uyghurs instead of sending them elsewhere.

A senior U.S. administration official told CNN that the State Department is working on a final agreement with Palau to settle the 13 remaining Uyghur detainees.

CNN's Don Lemon and Brian Vitagliano in Hamilton, Bermuda, and Jill Dougherty contributed to this report.