(CNN) -- Venezuela has promised to give Nicaragua $50 million to replace money that the United States said this week it would withhold from the Central American country, Nicaraguan President Daniel Ortega Saavedra said Saturday. 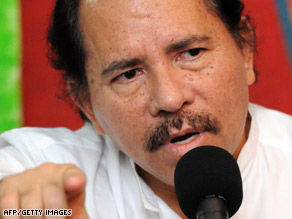 Venezuelan President Hugo Chavez promised the aid after Ortega learned that the United States was canceling $62 million of aid that was to have come from the Millennium Challenge Corporation, a U.S.-government-funded anti-poverty fund set up by former President George W. Bush.

Ortega expressed disappointment in President Barack Obama for the decision. "He expresses good will, but in practice, he has the same policies as President Reagan," Ortega told a crowd of supporters in Managua's Plaza of the Revolution.

In 1982, then-President Reagan supported funding the contras, the forces opposed to Ortega and his socialist Sandinista Party, which had come to power after overthrowing the U.S.-backed Anastasio Somoza in 1979.

Ortega called this week's decision not to follow through on the payment "disrespectful."

Wednesday's decision to cut the funds altogether came after the United States announced last November that it was suspending aid to Managua in the wake of what it said were fraudulent municipal elections.

Ortega, whose party members won most of the mayoralties, disputed that.

Still chafing over his loss to Violeta Chamorro, who replaced him as president in 1990, Ortega said those were the elections that were fraudulent. He said President George H. W. Bush affected the outcome by telling the Nicaraguans, "If you vote for the [Sandinista] front, the war is going to continue; if you vote for the enemies of the front, go in peace.' That was the promise that Bush made."

He described that pact as "a big lie, since the peace was already coming. We, the Nicaraguans, were making peace."

Ortega described the three U.S.-backed governments that ruled Nicaragua from 1990 until 2007 -- when he reclaimed power -- as anti-democratic. "They robbed the people of the right to health, the right to education, the right to decent housing," he said.

"They privatized energy industry, the telecommunications industry, the businesses of the workers -- those were nothing more than acts of corruption."

And he said that the $62 million would have been used to build 12 highways, not to support his government.

But work that has begun on two of the roads will be completed, said Rodney Bent, deputy CEO for the Millennium Challenge Corporation in an interview Friday with CNN en Espanol.

He denied any suggestion that the money was being used for political ends rather than simply to alleviate poverty.

"That's totally false," Bent said, adding that his corporation's funds are doled out regardless of a government's leftist, centrist or conservative policies.

"We want a clean government," he said, adding that because the elections were not clean, "we had to act."

All About Colombia • FARC • Ecuador • Venezuela