Coca cultivation down in Colombia, up in Peru, Bolivia

UNITED NATIONS (CNN) -- Coca cultivation and cocaine production have decreased in Colombia but increased in Bolivia and Peru, the United Nations reported. 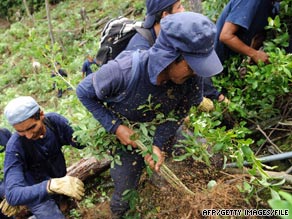 Workers help eradicate coca plantations in northwest Colombia in May.

Colombian cultivation was down 18 percent, and production decreased 28 percent in 2008, the U.N. Office on Drugs and Crime said in a report issued Friday.

"The increases for Bolivia and Peru show a trend in the wrong direction," said Antonio Maria Costa, executive director of the U.N. drug office.

Much of the decline in Colombia resulted from the manual eradication of 237 acres of coca, an increase of 44 percent over 2007, and the spraying of another 328 acres with herbicide, the U.N. said.

The production level is at a 10-year-low, the report said, and the cultivation amount is down to 2004 to 2006 levels.

"This is a remarkable achievement," Costa said in a release. "It means that more coca bush was eradicated in Colombia than was grown in all of Bolivia and Peru."

The value of coca leaf in Colombia is decreasing, making it less attractive for farmers -- 20,000 fewer households grew coca in 2008 than in 2007, a decrease of 26 percent.

The drug trade also is being disrupted, the report said.

Bolivia, likewise, reported a 45 percent uptick in seizures of coca base and a 145 percent increase in the seizure of cocaine.

"Cocaine supply is shrinking, as is demand in major markets of North America while cocaine use in Western Europe has stopped growing," Costa said. "This may explain why prices are up, and purity is down. This may also explain why cartels are becoming so violent."