(CNN) -- A new standoff was brewing in Honduras as the country's recently deposed president vowed to return, while the new provisional government said it would arrest him if he set foot back in the country. 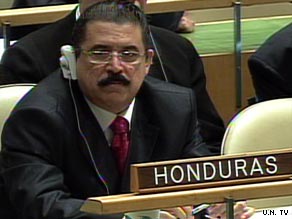 Political turmoil has swept this Central American nation of 8 million people following a military-led coup Sunday that ousted President Jose Manuel Zelaya. Troops entered the president's residence and sent him out of the country in exile. A veteran legislator, Roberto Micheletti, was sworn in that same day as provisional president with the support of congress.

Roberto Micheletti, the veteran legislator who was sworn in that same day as provisional president with the support of congress, was adamant that Zelaya would not return to power.

"He already committed crimes against the constitution and the laws; he can't return to be president of the republic," Micheletti told reporters Tuesday. "He can no longer return to the presidency unless a president from another Latin American country comes and imposes him with arms."

Micheletti added, "If there is an invasion against our country, we have seven-and-a-half million Hondurans ready to defend our territory and our laws and our homeland and our government."

However, Zelaya still vows to defy the provisional government.

"I am going to return on Thursday because they expelled me by force, and I am going to return as always: as a citizen and as president," Zelaya said at a U.N. news conference shortly after the world body unanimously adopted a resolution that he should be restored to power.

"Your servant has several accusations against him in Honduras," Zelaya said. "But nobody has given me a trial. Nobody has convened a tribunal."

Meanwhile, Micheletti's provisional government said Zelaya would be arrested if he returned.

"As soon as he arrives he will be captured, as we already have the arrest warrants ready," new Foreign Minister Enrique Ortez Colindres told CNN en Español.

Zelaya would face charges of violating the constitution, corruption and drug trafficking, among others, Ortez said.

The deposed president said he would travel to Washington to attend a meeting of the Organization of American States. He also is expected to meet Tuesday evening with Tom Shannon, the top U.S. official on Latin America.

Even as Zelaya spoke at the United Nations, his opponents held a large and noisy rally in Tegucigalpa, the capital of Honduras. Crowd members waved blue and white Honduran flags and signs denouncing Zelaya.

Roberto Micheletti, the new provisional president, briefly addressed the crowd Tuesday afternoon. He vowed that the next national elections, slated for November, will be held as planned, and that a new president will be sworn in as usual in January.

Gen. Romeo Vasquez Velasquez, the top Honduran military commander who had butted heads with Zelaya, also spoke at the rally. By removing Zelaya, the armed forces were only complying with their constitutional duties, he said.

"It will be an indefinite strike," Garcia said. "We don't recognize this new government imposed by the oligarchy, and we will mount our campaign of resistance until President Manuel Zelaya is restored to power."

Also on Tuesday, the U.S. State Department said it was reviewing its aid to Honduras as it works with regional partners on a deal to restore Zelaya to power and quell political unrest in the country.

State Department spokesman Ian Kelly said the U.S. was reviewing whether Zelaya's ouster met the legal definition of a "coup" before any decision was made.

"Because of the situation and the very dramatic nature of the events there and our profound concern about what's going on there, I think we're looking at a number of aspects of our cooperation," Kelly said.

The State Department has also issued a travel alert due "to the current unstable political and security situation in Honduras." The alert "recommends that American citizens defer all nonessential travel to Honduras until further notice."

In another development, two U.S. military officials in Washington confirmed to CNN that U.S. helicopters will fly over southern Honduras on a humanitarian relief mission Tuesday. The officials said there is great sensitivity to any public appearance by the U.S. military in the country.

The U.S. military also postponed some planned exercises with the Honduran military until the situation in the country settles down, according to the U.S. Southern Command.

Wright said this decision would be in effect for at least two to three weeks, or "until the political situation settles."

Zelaya was overthrown early Sunday when the Honduran military arrested him and flew him to Costa Rica. Micheletti, president of the Congress, was sworn in as provisional president later Sunday.

The United Nations, OAS and most nations in the Western Hemisphere, including the United States, have condemned the ouster and demanded that Zelaya be restored to power.

The World Bank said Tuesday it would freeze funds to Honduras until the crisis is resolved, and the United States said it is reviewing its aid to the Central American nation. The U.S. joined many other nations in co-sponsoring Tuesday's U.N. resolution.

Zelaya had been at odds with the other branches of government over a referendum he wanted to hold Sunday. The Honduran Supreme Court had ruled that the referendum was illegal, and Congress had voted not to hold it.

The high court also had overturned Zelaya's dismissal of Honduras' top general, who said the military would not participate in the referendum. The court ordered that the general be reinstated immediately.

Zelaya disregarded those actions and vowed to hold the vote anyway.

Watch part one of interview with Zelaya (in Spanish) » |

Honduran authorities on Monday clashed with Zelaya supporters, who took to the streets and threw rocks at authorities, burned tires and set up roadblocks. iReport.com: Are you there? Share your photos, videos

In a radio address Tuesday, Micheletti said Zelaya would be arrested if he came back.

Watch interview with Micheletti (in Spanish) »

Micheletti also told Honduras' representatives at the United Nations and OAS to quit speaking against the new government or they immediately will be removed from their posts. They are not authorized, he said, to speak for the Honduran government.

In another development, two U.S. military officials in Washington confirmed to CNN that American helicopters will fly over southern Honduras on a humanitarian relief mission Tuesday.

The officials said there is great sensitivity to any public appearance by the U.S. military in the country.

Three Black Hawk helicopters are scheduled to leave an air base at Soto Cano in Honduras and fly south to Nicaragua. They will be used to support the USNS Comfort, which is conducting a medical relief mission.