PANAMA CITY, Panama (CNN) -- Ricardo Martinelli, the multimillionaire owner of a supermarket chain, was inaugurated as president of Panama on Wednesday. 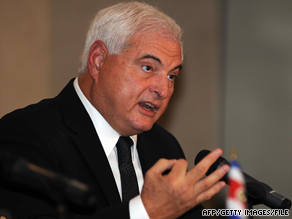 Ricardo Martinelli is a pro-business conservative who defeated a candidate from the ruling center-left party.

National Assembly President Jose Luis Varela performed the swearing-in and placed the presidential sash on Martinelli, a pro-business conservative who defeated a candidate from the ruling center-left party in May.

The citizens of Panama "want things to be done differently," Varela said at the inauguration. "An attitude of change starts today."

In his first speech as president, Martinelli promised a smaller government budget but raises for public workers.

Public safety, an issue that the outgoing administration of Martin Torrijos struggled to maintain, will be a priority, Martinelli said.

"Our prisons will be rehabilitation centers, not schools for criminals," he said.

Panama will also work with Mexico and Colombia to combat drug trafficking in the region, Martinelli said.

Among the dignitaries at the inauguration was deposed Honduran President Jose Manuel Zelaya, who was ousted in a military-led coup Sunday. The Organization of American States has condemned the coup, and Zelaya has continued to carry out his presidential duties.

The son of Italian immigrants, Martinelli, 57, is a self-made businessman who is chairman of the Super 99 supermarket chain, one of the largest private companies in Panama.

The U.S.-educated president previously served as minister and chairman of the board of directors of the Panama Canal Authority and formerly was director of social security for Panama, according to his Web site.

Martinelli won the presidency with 60 percent of the votes in a race against ruling-party candidate Balbina Herrera.

All About Panama • Drug Trafficking