(CNN) -- If there was ever any question over the importance of finding the black boxes from Air France flight 447 then there is certainly none now. 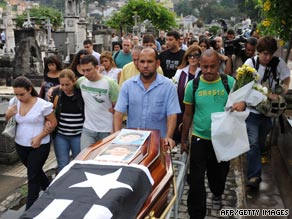 Most of what we heard from Thursday's briefing by the investigating team only serves to deepen the mystery behind the loss of the Airbus A330.

Lead investigator Alain Bouillard sums matters up when he says: "As of today we are far from having any real idea of the causes of this accident."

Consider what we now know. The aircraft was cruising in an area in which other aircraft were successfully managing to avoid the worst of the storms. It did however suffer "inconsistent" speed indications to the pilots and its computers and this is an aircraft type with a known history of such problems.

But even if the aircraft penetrated deep into the storm, it didn't break up in the air. Instead, at some point it seems the crew lost control of this state-of-the-art, highly-automated aircraft in unknown circumstances. And it then followed what must have been a horrific trajectory down to the ocean nearly seven miles below which it finally struck belly-first, crushing internal structures.

The current evidence sheds little light on those terrible minutes. We still don't know why the aircraft was as close to the storm as it was, or what caused the malfunctioning speed indications. We don't know if it was damaged by lightning or turbulence or even if it was damaged at all. Perhaps the crew was simply unable to fly the aircraft in the darkness, severe turbulence and possibly cloud without the vital airspeed data.

We don't in fact know who was flying the aircraft -- it is a curiosity that the captain's body is among the relatively few found so far. Perhaps he was taking his authorized rest as the aircraft headed over the ocean in line with normal procedure and so was not in the cockpit at all as the remaining two pilots flew the aircraft.

Some facts that we learned are not so surprising and caution is needed in drawing conclusions from them. It's confirmed that there was no emergency call, but not only is it a common feature of accidents that pilots don't make a call, but we now hear that radio communications on the night had been hopelessly difficult throughout, perhaps making it seem even less worthwhile for them to bother with it.

The investigators tell us that no inflated lifejackets have been recovered, but imagine the situation in the cabin. Not only did the passengers have no reason to expect to ditch, but with the aircraft out of control it may have been impossible for them to reach them due to high G-forces.

So what now? There have been conflicting views about how long the pinger signal from the black boxes will last after the nominal 30 days is up. Bouillard gave his view --- it could be another 10 days, although maybe it's stopped already of course.

So the search continues with submarines and tethered robots until July 10. Then new techniques are required to physically look for wreckage, and hopefully the black boxes, on the ocean floor. That is likely to involve an autonomously guided unmanned minisub which can patrol at some 5,000 meters depth sending back sonar images, and can then be moved in to investigate objects of interest by video link.

But if the flight data recorder in particular is not found then the air transport industry is staring at the deeply worrying prospect of permanently living with the unexplained loss of one of the world's most modern aircraft.