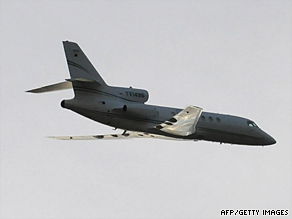 Zelaya told the Venezuela-based news network Telesur that his jet was denied permission to land in Tegucigalpa, where military vehicles were arrayed on the runway. The aircraft was en route to San Salvador, the capital of neighboring El Salvador, after what Zelaya called a "fruitless" attempt to land.

After being denied permission to land in Honduras, Zelaya's plane made a stop to refuel in Nicaragua's capital, Managua.

During the stop, he met with Nicaraguan President Daniel Ortega -- who is a leftist ally of both Zelaya and Venezuelan leader Hugo Chavez -- and told Telesur that his supporters had been trying to remove obstacles from the runway in Tegucigalpa when troops opened fire. "The people pulled back when fired upon," he said.

In a statement read on national television, the interim government said police opened fire when protesters tried to force their way onto the airport grounds.

"The outcome of police intervention has not been verified," the statement said, adding, "The government regrets the consequences of these violent demonstrations."

"We call on national and international people who participate in these actions to abstain from encouraging disorder and disquiet of our population not to interfere with our country's development efforts," the statement said.

The provisional government that took power after the Honduran military removed Zelaya from office June 28 has vowed to keep him from coming back from exile. Government officials said Zelaya would be arrested if he returned, but several thousand protesters who ringed the airport said they would protect the ousted president with a human cordon.

Zelaya called on the U.N., the Organization of American States and the United States to take action after his return was thwarted Sunday.

"What are at risk are social reforms started in Latin America," he told Telesur. "What we see is a return of the right in Latin America -- a more reactionary right, more prone to killing, more fascist than in the past. They're regrouping. It's almost a conspiracy, a plot."

At a news conference earlier Sunday, provisional President Roberto Micheletti said that Zelaya's return could create unrest in a country that has seen demonstrators for both sides in the streets since the coup.

"I don't want a single drop of blood to be spilled in Honduras," Micheletti said.

The leftist Zelaya was ousted in a military-led coup the same day he planned to follow through with a referendum that the courts and the congress had ruled illegal and that the military said it would not support. Lawmakers voted to strip Zelaya of his powers and named Micheletti as provisional president.

The provisional government maintains that the military action against Zelaya was backed by a court order and that arrest warrants have been issued against him for violating the constitution.

Before his jet reached Tegucigalpa's airspace, Zelaya told Telesur he remained commander-in-chief of the Honduran armed forces and demanded they "to open up the airport and avoid any problems with the landing."

A delegation supporting Zelaya, including the head of the OAS and Presidents Cristina Fernandez de Kirchner of Argentina, Rafael Correa of Ecuador and Fernando Lugo of Paraguay, was to fly on a separate plane heading to neighboring El Salvador.

The OAS voted Saturday to suspend Honduras from the organization after the provisional government failed to respond to a 72-hour deadline to restore Zelaya as president. The United States and the World Bank have suspended some aid from Honduras, and the European Union and other nations have recalled their ambassadors from the country.

Watch report on suspension of Honduras »

In a conference call with journalists, senior U.S. administration officials -- who insisted on anonymity because of diplomatic sensitivities -- said that if Honduras denied Zelaya entry, he would be expected back in Washington on Monday to continue conversations at the OAS.

CNN's Karl Penhaul and Charley Keyes contributed to this report.