(CNN) -- The mayor of Venezuela's capital on Tuesday was completing his fifth day of a hunger strike in protest of what he called harassment and interference from President Hugo Chavez. 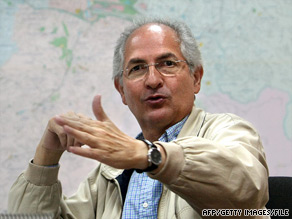 Caracas Mayor Antonio Ledezma, shown in February, alleges many of his duties have been illegally usurped.

Antonio Ledezma, mayor of Caracas, has been carrying out his protest inside the offices of the Organization of American States, where his demand was for the inter-American body to investigate allegations of illegal power-grabbing moves by the federal government.

The secretary general of the OAS, Jose Miguel Insulza, responded to the mayor in a phone conversation Tuesday, Ledezma adviser Milos Alcalay said in a news conference. Insulza agreed to meet with a group of mayors and governors of Venezuela who have made similar allegations against the Chavez government, Alcalay said.

"Respectfully, but categorically, [Ledezma] described a series of instances ... of increasing harassment in a systematic manner by the central power against the metropolitan mayor," Alcalay said.

Politically, Caracas is split into five districts, each with its own mayor, and the city also has a metropolitan mayor who coordinates and oversees police, health and education.

Chief among Ledezma's complaints was the creation in April of a "head of government" who, appointed by Chavez, took over many of the metropolitan mayor's duties in addition to offices and budget.

As a result, Ledezma said his office does not have enough money left to pay all of his staff. Several workers from the mayor's office joined him in the hunger strike, according to the mayor's Web site.

The president's supporters argue that the constitution gives the federal government the responsibility of administrating the capital.

But in televised remarks last week, Ledezma held a copy of a law that dictates the duties that his office is supposed to hold.

"This law has been violated over and over again by the current government," Ledezma said.

Ledezma is not the only opposition politician who has complained of being strong-armed by Chavez.

Manuel Rosales, a former governor and presidential challenger to Chavez, fled the country in April after Chavez accused him of corruption. Rosales denied the charges.

Earlier this year, former Venezuelan Defense Minister Raul Baduel, a Chavez ally-turned-critic, was arrested twice on charges that he stole $14 million from the armed forces.

Baduel has denied the allegation and called the charges politically motivated.

All About Venezuela • Hugo Chavez • Caracas