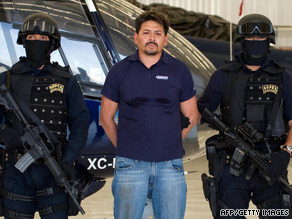 The attacks were in retribution for the capture early Saturday of Arnoldo Rueda Medina, a high-ranking member of the drug cartel known as La Familia Michoacana (The Michoacan Family), Notimex reported.

Among other allegations, he was arrested for his role in designing the hierarchy of the organization, the production of synthetic drugs and movement of marijuana and cocaine to the United States, said Mexico's secretary of public security. Rueda was arrested along with a 17-year-old male who worked for him.

Following his arrest Saturday morning in Morelia, Michoacan, men armed with high-powered rifles and grenades attacked the police station where he was being held, the Secretary of Public Security said.

Two soldiers were killed in Zamora, shot by men in a passing car as they walked to their headquarters. The Secretary of Public Security told the newspaper Cambio de Michoacan that 25 spent shells from an R-15 rifle and 17 from an AK-47 were found at the scene.

Another rifle and grenade attack took place near Acapulco in Guerrero state, which borders Michoacan, but no one was injured.

Saturday's attacks came just days after a drug gang in Tijuana declared they were at war with police, threatening to kill five officers every week until Police Chief Julian Leyzaola resigns.

The threat was made in a note found on the windshield of a slain officer's car, news reports said.

At least three Tijuana officers have been killed since Monday, reports said. Leyzaola, a former army colonel, replaced a police chief removed from office in December after receiving numerous threats.

"Leyzaola has become the poster boy for honest police work, which has put the drug gangs on notice," Vicente Calderon, a reporter for the Tijuana Press news agency, told CNN affiliate KUSI.

"They believe he is serious, that he means business and is trying to re-establish the rule of law that has been affecting the city and whole state for many years since organized crime established themselves in Baja [California]."

Tijuana, the westernmost city in Mexico, is across the border from San Diego, California. Sixteen police officers have died there in 2009, and officers are now patrolling the city in groups of six, KUSI reported.

CNN's Emanuella Grinberg and Monica Trevino contributed to this report.

All About Mexico • Drug Trafficking • Crime