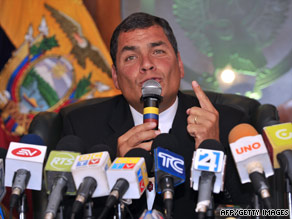 Ecuador's President Rafael Correa, as pictured in June, says a probe into FARC's claims will clear his name.

The guerrilla group, known by its Spanish acronym FARC, also has had conversations with Correa's emissaries and has reached "some accords, according to documents that we have," Suarez said in a videotape.

Correa denied the allegations and said he wants the nation's civil commission to see "if the Ecuadorian government, if the Alianza PAIS [political party] has received 20 cents from any foreign group, not just from the FARC."

The leftist president said that during the campaign, some opponents accused him of receiving money from leftist Venezuelan President Hugo Chavez, from drug cartels and from the FARC.

"They just don't know what else to say," Correa said. "It is up to you to decide who to believe: the same people as usual or those who endanger their lives to save the country."