(CNN) -- Behind the wheel of a sport utility vehicle, deposed Honduran President Jose Manuel Zelaya on Thursday started his journey from Managua, Nicaragua, to the country's border with Honduras. 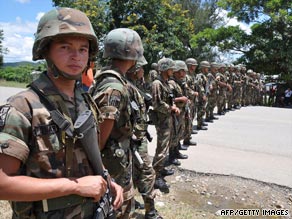 Honduran soldiers block the road at the Honduras-Nicaragua border in Paraiso, Honduras.

A caravan of Zelaya supporters and reporters headed north to the city of Esteli, close to the Honduran border. From there, Zelaya would finalize his plans to cross back into Honduras, he said at a news conference before departing.

The ousted president stated his intention to return to his homeland this week, raising concerns about increased unrest.

The days since the June 28 military-led coup that deposed Zelaya have been marked by mostly peaceful demonstrations by supporters and detractors of the government of interim President Roberto Micheletti.

One notable exception was an attempt by Zelaya to return by plane on July 5, only to be turned away by military vehicles blocking the airport's runways. One man was killed in clashes between Zelaya supporters and police.

"Any step that would add to the risk of violence in Honduras or in the area, we think would be unwise," Crowley said.

Zelaya told reporters he hopes that border guards in Honduras will recognize him as president and commander in chief, and put down their weapons when he attempts to cross as early as Friday.

"We go with a white flag, with a flag of peace," Zelaya said.

Micheletti's government, which has vowed to arrest Zelaya on charges of violating the constitution, announced on Thursday a curfew in the border area with Nicaragua from 6 p.m. to 6 a.m., the newspaper La Prensa reported. A less restrictive curfew remained in effect in other parts of the country, the paper said.

The backdrop to the tensions following Zelaya's caravan is a peace agreement offered Wednesday by Costa Rican President Oscar Arias, who mediated two rounds of unsuccessful talks between the two sides.

The document, dubbed the San Jose Accord, calls for Zelaya's return to power, the creation of a unity government, and early elections.

The accord was very similar to an original plan suggested by Arias, but with more details and a creation of a truth commission to investigate the events that led to the crisis. It also included a timeline for its implementation, which placed Zelaya back in Honduras by Friday.

But Zelaya seemed intent to return on his own timeline, as neither side has signed the agreement.

Hopes were slim that the agreement would be signed, as the Zelaya camp publicly said it rejected the document, and Micheletti's side said it would have to seek approval from the other branches of government before proceeding. The Honduran supreme court has said it would not accept Zelaya's return under any circumstances.

On Thursday, the United States and the Organization of American States expressed support for the San Jose Accord.

The Honduran political crisis stems from Zelaya's desire to hold a referendum that could have opened the door to extending term limits by changing the constitution, even though the congress had outlawed the vote and the supreme court ruled it illegal.

Zelaya was removed from office June 28 in a military-led coup and replaced by congressional leader Micheletti a few hours later.

The coup has drawn international condemnation, including demands by the United Nations General Assembly, the OAS and the European Union that Zelaya be reinstated.

Micheletti has steadfastly rejected that a coup took place, saying Zelaya's removal was a constitutional transfer of power.