In Havana, U.S. turns off sign critical of Cuban government

WASHINGTON (CNN) -- It was the U.S. government's version of the ticker in New York's Times Square, blasting Havana's main seaside strip with anti-Cuba slogans in 5-foot high crimson letters. It symbolized the tit-for-tat diplomatic row between Washington and Havana. 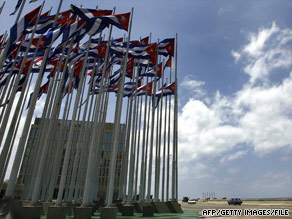 Cuban flags flutter in front of the U.S. interests section building in Havana in 2007.

But the ticker at the top of the U.S. interests section in Cuba has gone blank, yet another signal the past half-century of animosity between the two countries is easing.

State Department spokesman Ian Kelly said the ticker was turned off in June because it was not considered "effective" as a means of delivering information to the Cuban people.

The scrolling electronic sign, fitted across 25 windows of the U.S. interests section, ran quotes from American heroes, such as Martin Luther King's "I have a dream that one day this nation will rise up," and Abraham Lincoln's "No man is good enough to govern another man without that other's consent."

It also streamed news and political messages that blamed Cuba's everyday problems on the communist regime led by Fidel Castro and the island's socialist economy. The island's transportation woes, for example, were the topics of jabs such as, "Some go around in Mercedes, some in (Russian-built) Ladas, but the system forces almost everyone to hitch rides."

The sign -- erected in 2006 by the Bush administration and billed as a way to circumvent censorship and, the administration said, offer hope and freedom to Cubans oppressed by a brutal regime -- fueled a propaganda war with Fidel Castro, who referred to the U.S. interests section as "the headquarters of the counterrevolution."

Calling the ticker an assault on Cuba's sovereignty by an imperialist bully, an infuriated Fidel Castro marched 1 million Cubans past the interests section in protest, dug up the U.S. mission's parking lot and blocked the ticker by erecting anti-U.S. billboards and 138 huge black flags to commemorate victims of so-called U.S. aggression. He promised there would be no contact between U.S.-based diplomats in Havana and Cuba's foreign ministry until the sign came down.

Fidel's brother Raul Castro, who now rules Cuba, took down the anti-U.S. billboards this year as ties between the two countries improved. In April, President Obama lifted restrictions on Cuban-Americans traveling to the island and sending remittances to relatives there. And this month, U.S. and Cuban diplomats held their first talks since 2003 on Cuban migration to the United States.

The State Department's Kelly acknowledged most Cubans couldn't read the ticker because of the counter-propaganda erected by the Cubans. The "dueling billboards," Kelly said, were not promoting a productive U.S.-Cuba relationship.

Kelly said measures also announced by Obama in April to allow U.S. cell-phone networks and other telecommunication technology to operate on the island would do more to allow a free flow of information to the Cuban people.