(CNN) -- The U.S. Coast Guard has called off its search for as many as 79 Haitians missing after a boat capsized near the Turks and Caicos Islands, a spokeswoman said early Thursday. 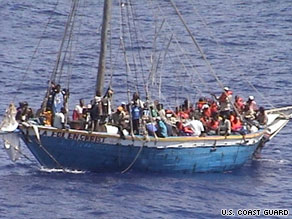 The U.S. Coast Guard intercepted this crowded boat last week and repatriated its occupants to Haiti.

The vessel overturned Monday with about 200 onboard, said Petty Officer Jennifer Johnson, a Coast Guard spokeswoman.

A nurse at a hospital in the Turks and Caicos said about 70 people were taken there, including four who had died.

Five people were admitted to the hospital, and the others had minor injuries, the nurse said.

The boat's occupants were migrants from Haiti, according to the Coast Guard. The overcrowded vessel was thought to have set sail from the Haitian port of Cap Haitien, the Turks and Caicos Sun newspaper reported.

The Coast Guard contributed one boat -- a 210-foot cutter Valiant -- and three aircraft to the search, Johnson said.

Turks and Caicos authorities were using small boats, she said.

The British territory is about 550 miles southeast of Miami, Florida.

Haiti, which shares the island of Hispaniola with the Dominican Republic, is the poorest country in the Western Hemisphere.

All About Turks and Caicos Islands • Haiti • U.S. Coast Guard