WASHINGTON (CNN) -- The release of a report that would free up more than $100 million in U.S. aid to Mexico to combat drug cartels has been delayed by Sen. Patrick Leahy, D-Vermont. 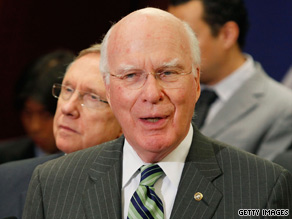 Mexico has not met all of the conditions for aid, specifically the prosecution of police and military officers who violate human rights, Leahy said in a statement released Wednesday.

The money in question is part of the Merida Initiative, a $1.4 billion, three-year program, aimed at fighting drug cartels that the Mexican government says are responsible for more than 10,000 deaths since Mexican President Felipe Calderon took office in 2006.

The Merida Initiative aid from the United States was authorized to help Mexico with counternarcotics, port and airport security, technology, and training and strengthening of law enforcement institutions.

Most of the aid was released without conditions, but the agreement stipulates that 15 percent of the aid will be withheld until the State Department gives Congress a favorable report on Mexico's human rights record.

The Washington Post reported that the State Department was prepared to present a favorable report ahead of President Obama's visit to Mexico this weekend, but Leahy rejected the report.

"There needs to be evidence that the military is accountable to the rule of law," Leahy said. "Those requirements have not been met, so it is premature to send the report to Congress. We had good-faith discussions with Mexican and U.S. officials in reaching these requirements in the law, and I hope we can continue in that spirit."

The Mexican government's battle against the cartels has faced reports of abuses by its soldiers.

Politicians in Mexico bristled at the conditions placed on the remainder of the aid. The conditions are reminiscent of detailed, annual drug cooperation certifications by the United States that countries like Mexico objected to as humiliating and hypocritical. In 2002, the drug certification process was softened.

"While this is important for our own domestic political agenda, it does not fall on our strategic partner, the United States, to make any sort of certification process," Congressman Cristian Castano, of Calderon's National Action Party, told reporters.

Mexican Sen. Carlos Jimenez of the Institutional Revolutionary Party said, "We must face this together, without recriminations, without putting each other against the wall, because then it ceases to be a friendly cooperation."

Before Leahy's objections to the report, the State Department signaled it would certify Mexico's obligations for the aid.

"I do think that President Calderon has taken some very courageous steps in fighting back against this scourge of the drug cartels which have terrorized the Mexican people and have attacked Mexican law enforcement personnel," Kelly said. "And he's consistently made clear that he will take allegations of human rights abuses very seriously, particularly by members of his security forces."

Mexico has faced an unprecedented wave of violence stemming from drug cartels, both from turf battles between cartels, and between the cartels and authorities.

Calderon has made fighting the cartels a priority, and has sent more than 45,000 soldiers around the country to fortify poorly paid and often corrupt local police forces.

"I continue to support the goals of the Merida Initiative, but the military strategy alone is not a solution in the long term nor is it yet clear what it can achieve in the short term," Leahy said. "Mexico needs effective police forces and a justice system that works. And as long as the demand for drugs in the United States and the flow of guns to Mexico continue at these levels, it will be difficult to neutralize the cartels."