(CNN) -- Honduras reversed course Monday, saying it will allow a delegation from the Organization of American States to visit the country -- on the condition that the organization's head attends only as an observer. 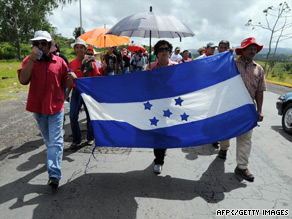 Supporters of Manuel Zelaya march Sunday in support of the ousted Honduras president.

A day earlier, Honduras had rejected the planned visit, calling the organization's Secretary-General Jose Miguel Insulza biased and unprofessional. The country's foreign ministry said Insulza's inclusion in the mission made the trip unacceptable.

Insulza has called for the reinstatement of Honduran President Jose Manuel Zelaya, who was ousted in a military coup in June.

The delegation was to arrive on Tuesday. The foreign ministry said Monday that it would decide on a new date within the next two days.

It was not immediately known whether the OAS would agree to the foreign ministry's condition.

A delegation of foreign ministers from six nations had been chosen to travel to Honduras to try to find a resolution to the political turmoil that has gripped the country since Zelaya's ouster.

The mission was in response to a call from Honduran interim President Roberto Micheletti for a special envoy to restart talks.

Two rounds of talks in July, mediated by Costa Rican President Oscar Arias, failed to reach an agreement. Arias' proposed peace accord remains on the table, however. Neither side has signed the document.

The foreign ministry said the delegation originally did not include Insulza, because of "his lack of objectivity, impartiality and professionalism." His intended participation in the trip rendered the visitors unwelcome, the statement said.

The OAS suspended Honduras from its organization shortly after the coup, and Insulza has said that the return of Zelaya is a condition for Honduras to rejoin the international community.

He was ousted in a coup on June 28. The congress named Micheletti provisional president shortly after Zelaya was detained by the military and sent into exile. Micheletti and his supporters dispute that a coup took place and argue that the action was a constitutional transfer of power.