(CNN) -- Costa Rican President Oscar Arias has been diagnosed with the H1N1 virus, commonly known as the swine flu, the government said in a televised statement on Tuesday. 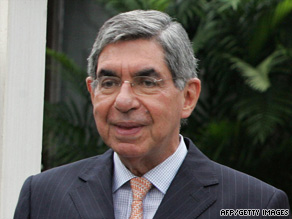 Oscar Arias, the president of Costa Rica, has contracted the H1N1 virus.

A doctor's visit on Tuesday revealed that the president had the H1N1 virus, cases of which had been reported earlier in the Costa Rican capital of San Jose.

The president's overall health was good, but following his doctor's advice, he will rest at his home until Sunday, Rodrigo Arias said.

The president is expected to return to work on Monday, the minister said.

As of Friday, there were 718 confirmed cases of the H1N1 virus in Costa Rica, and the virus has been blamed for 27 deaths, according to a report by the country's ministry of health.

More recently, he acted as mediator between two feuding sides claiming the leadership of Honduras.