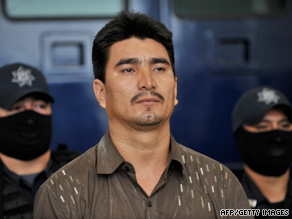 Dimas Diaz Ramos, known as "El Dimas," also is accused of being a top drug exporter to the United States, hiding the contraband in the tires of trucks taking produce across the border.

"The federal police began its investigation because of a threat made against the president of the republic, as a result of the declared war against organized crime and after a series of arrests and seizure of large amounts of cash belonging to the 'El Mayo' Zambada organization last year by the army and federal police," Pequeño said at Monday's news conference.

"Through intelligence reports by the federal government, it became known that the threat was made by the Cartel del Pacifico, and Dimas Diaz had been tasked with coming up with the details for a possible attempt."

Mexican officials did not release details of the alleged plot.

Speaking in Guadalajara after a meeting with President Obama and Canadian Prime Minister Stephen Harper, Calderon downplayed any possible attempt on his life.

"It would not be the first nor the last time that there is talk about some assassination attempt on my life," Calderon told reporters.

Diaz and the four other suspects were arrested in the city of Culiacan in Sinaloa state, officials said.