BUENOS AIRES, Argentina (CNN) -- Jewish groups and the Argentine government condemned Friday the nomination of a man accused in the 1994 terrorist bombing of a Jewish center to serve as Iran's defense minister. 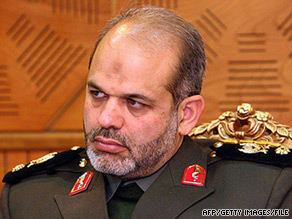 Ahmad Vahidi has been nominated to serve as Iran's defense minister.

Iranian President Mahmoud Ahmadinejad nominated Ahmad Vahidi to fill the cabinet position on Wednesday, which drew a rebuke from Jewish leaders in Buenos Aires, including one from the Delegation of Israeli-Argentine Associations, or DAIA.

"The decision adopted by the Iranian president, who systematically denies the Holocaust and calls for the destruction of the state of Israel, constitutes an unqualified insult to the victims of the massacre and their families, to the Judaic-Argentine community and to the Argentine Republic and its judicial system and deserves the most categorical condemnation by the national government and from the community of democratic nations," the group said in a written statement.

The Argentine chancellery said in a statement the nomination "constitutes an affront to Argentine justice and to the victims of the brutal terrorist attack."

It added, "The Argentine government demands once again that the Islamic Republic of Iran cooperate fully with Argentine justice, permitting the people accused of participating in the attack against the AMIA to be judged by competent courts of justice."

Argentine authorities have accused Vahidi of planning the July 18, 1994, blast of the Israeli-Argentine Mutual Association, in which 85 people died and 200 were wounded.

Vahidi is one of six former and current Iranian officials sought by Interpol in connection with the bombing. Also among them is Mohsen Rezaie, who ran in the June 12 election as a conservative.

Argentine President Cristina Fernandez de Kirchner and other leaders commemorated the 15th anniversary of the attack on Tuesday. The original plans for commemoration, to have been held last month, were delayed because the country was attempting to quell the outbreak of swine flu.

Vahidi, a former leader of the Iranian Revolutionary Guard, is accused of working with Lebanon's Hezbollah militants, who are accused of carrying out the attack.

Iran has denied being behind the bombing.

Argentina was the site of another anti-Semitic terrorist attack, the 1992 bombing of the Israeli Embassy in which 29 people died and more than 200 were wounded.

Neither attack has been solved.

All About Argentina • Iran • Terrorism