HAVANA, Cuba (CNN) -- A new video and a photo of ailing Communist leader Fidel Castro surfaced on Sunday, revealing a healthier-looking man than in previous photos. 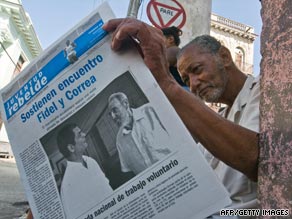 A man in Havana, Cuba, reads a newspaper on Sunday featuring a picture of a healthy-looking Fidel Castro.

State-run Cubavision aired video of Castro during its Sunday news broadcast, saying the footage was taken Saturday when the former president met with Venezuelan law students.

It was the first video of Castro broadcast in at least a year.

The meeting involved discussions of economic matters and medical checkups, according to the state-run newspaper.

Another photo of the former Cuban president was released on August 13 by Pastors For Peace, a U.S.-based advocacy group that recently traveled to the island nation and is pushing for an end to the near half-century-old U.S. trade embargo.

The Cuban leader ceded the presidency to his younger brother, Raul, last year, but has retained leadership of the Communist Party, the only legal political party in Cuba.

All About Fidel Castro • Cuba