OAS team in Honduras to push for ousted leader's return

(CNN) -- A delegation of foreign ministers led by the Organization of American States' secretary-general arrived Monday in Honduras in an effort to restore ousted President Jose Manuel Zelaya to office. 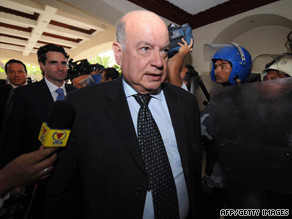 The delegation represents seven countries, including Canada, Mexico and Argentina. The organization has demanded that Zelaya, who was ousted June 28 in a military-led coup, be allowed to return to Honduras and resume his presidency.

The United Nations and European Union also have condemned the coup and refused to recognize the provisional government led by former congressional leader Roberto Micheletti.

The delegation's visit comes two days after the Honduran Supreme Court said Zelaya would face charges of violating the constitution if he returned to the country. Under an accord suggested by Costa Rican President Oscar Arias, Zelaya would have been allowed to return with diminished powers. But Micheletti had said he could not agree to the pact until the Supreme Court ruled on the matter.

The Inter-American Commission on Human Rights issued a preliminary report Friday after a five-day visit to Honduras last week.

"During its visit, the commission confirmed the existence of a pattern of disproportionate use of public force, arbitrary detentions and the control of information aimed at limiting political participation by a sector of the citizenry," the report said. "The commission confirmed the use of repression against demonstrations through the placement of military roadblocks; the arbitrary enforcement of curfews; the detentions of thousands of people; cruel, inhuman, and degrading treatment; and poor detention conditions. Particularly serious is the fact that four persons died and several others were injured by firearms."

The commission called for an "exhaustive investigation" into the deaths.

The panel also found that freedom of the press has been impeded.

"Information control has been exercised through temporary shutdowns of some media outlets, the military occupation of their installations, a ban on the transmission of signals by certain cable TV stations that were reporting on the coup d'etat, the selective use of power outages, which affected the transmissions of audiovisual media reporting on the coup, and attacks and threats against journalists from media outlets with different editorial stances," the report said.

Micheletti has insisted that Zelaya was not overthrown but instead was replaced through constitutional means. Micheletti points out that a civilian government, not the military, assumed control. But the OAS commission found that the military has played a large role in the coup's aftermath.

"The commission was also able to verify during its visit that the interruption of the constitutional order brought about by the coup d'etat has been accompanied by a strong military presence in various spheres of civilian life; the suspension of guarantees through the implementation of a curfew that does not meet the standards of international law; and inconsistency in the effectiveness of judicial remedies to safeguard people's fundamental rights," the report said.

While in Honduras, the foreign ministers were scheduled to meet with Zelaya's wife, Xiomara Castro de Zelaya, members of the deposed president's Cabinet, business leaders and members of Congress.

Honduras is scheduled to hold presidential and congressional elections in November; the president's four-year term ends in January.

All About Honduras • Jose Manuel Zelaya • Organization of American States