(CNN) -- Venezuelan Stefania Fernandez was named Miss Universe 2009, beating out more than 80 other contestants during a pageant held Sunday night in Nassau, Bahamas. 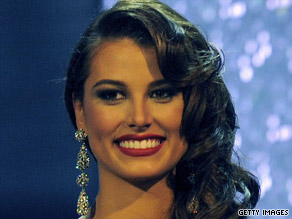 The 18-year-old was crowned by another Venezuelan, Dayana Mendoza, Miss Universe 2008, marking the first time that two contestants from the same country have won the title in consecutive years.

As Miss Universe, Fernandez will have the use of a New York City apartment for the year of her reign, and will receive living expenses. Other prizes include a two-year scholarship at the New York Film Academy; a vacation for two in the Bahamas; and a wardrobe, including evening wear, swimsuits and jewelry.

All About Bahamas • New York City