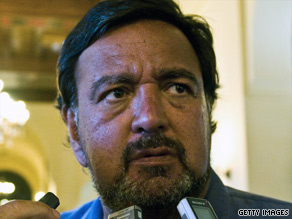 "There is a good atmosphere [between the two countries]," he said at a news conference in Havana on Friday. "It is the best atmosphere I've seen in many years."

Richardson called for "concrete steps from both sides," but noted a "lack of flexibility in their positions" and reciprocity from the Cuban government.

He also called on the United States to "pay more attention to the Cuba issue, though acknowledged more urgent U.S. priorities like health-care reform have drawn attention away from normalizing relations.

In his first trip to Cuba in 13 years, when he negotiated the release of three political prisoners in 1996, Richardson said he is not in Cuba as a special U.S. envoy.

"My main objective is trade and to improve commercial ties with Cuba," he said, though he acknowledged plans to report recommendations to the Obama administration early next week.

Despite the near half-century trade embargo, the U.S. Treasury Department allows U.S. states to sell agricultural, medical and IT products in Cuba on a cash basis.

The governor also called on the Obama administration to ease restrictions of biotechnology products, allow Cubans to travel to the United States for academic and cultural exchanges, and implement the changes to Cuban-American travel and remittances announced in April.

He mentioned a proposal to allow diplomats in either country to move more freely and offered to broker a dialogue between the Cuban government and Cuban-Americans.

"If there's going to be a solution for the normalization of relationship between Cuba and the United States, Cuban-Americans must play a role," he said, noting that any such dialogue would not substitute government-to-government talks.

"It was a positive message that I got," he said of the letter.

The former presidential candidate was nominated for Commerce Secretary in the Obama administration, but withdrew amid an investigation over whether CDR Financial Products inappropriately won $1.4 million in state work for New Mexico.

All About Bill Richardson • Cuba