(CNN) -- A French filmmaker who recently finished a documentary about a violent street gang in El Salvador was found shot dead in the town of Tonacatepeque, about 10 miles northeast of the capital city of San Salvador, authorities said. 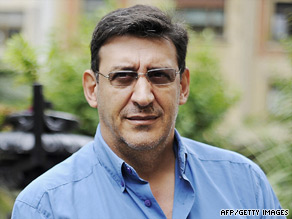 Christian Poveda, 52, was shot at least four times in the face, according to local reports.

Poveda's documentary, "La Vida Loca," which follows the lives of members of the Mara 18 street gang, had been screened at a handful of film festivals and is slated for wider release later this month. His body was found in an area controlled by that same gang, local reports said.

A motive of Poveda's murder Wednesday was being investigated, National Civil Police Director Carlos Ascencio Giron said in a statement. Citing the pending investigation, police did not immediately give any details, but Ascencio Giron said that the homicide and organized crime divisions of his department were handling the case jointly with the attorney general's office.

Salvadoran President Mauricio Funes said he was "very shocked" by the news of the murder.

According to a statement by the president's office, Poveda first arrived in El Salvador in the 1980s to cover the civil war as a photojournalist. He left to report from other war zones, but returned to research and film the gangs in El Salvador. iReport.com: Magazine editor remembers Poveda

Poveda on Wednesday was traveling in his car after filming in a town called Soyapango when unknown assailants intercepted him and then shot him, according to the statement.

The homicide sector chief for the National Civil Police, Marco Tulio Lima, told the newspaper El Diario de Hoy that police detained one person in connection to the killing, but did not say if the person was a suspect.

"Christian Poveda's recent film about El Salvador's street gangs provided a powerful inside look into youth violence in one of Central America's most dangerous regions," said Carlos Lauria of the Committee to Protect Journalists.

"We urge the authorities to conduct a prompt and exhaustive inquiry into his murder and bring all those responsible to justice."

In March, "La Vida Loca" was a hit with audiences at the Guadalajara International Film Festival in Mexico, the organization told CNN through a spokesman.

Poveda gave himself fully to his work and spent years following the Mara 18, the festival spokesman said.

"Creating documentary implies working for the love of the profession, and that was what our friend Christian showed us in the short time that we had the opportunity to know him," the Film Festival said in a statement.

The producer of Poveda's documentary, Carole Solive, told The Guardian newspaper that, "He went out alone . . . to get back in touch with the gang whose story he had filmed."

"But their boss was in prison and he found himself in the middle of very restless young capos who, for the first time, asked him for money," she said.

All About El Salvador • Central America • Murder and Homicide