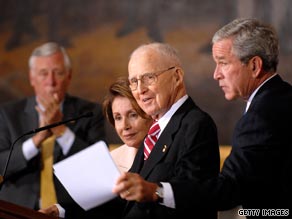 A 1970 recipient of the Nobel Peace Prize, Borlaug was a distinguished professor of international agriculture at the university.

Borlaug started at Texas A&M in 1984, after working as a scientist in a program that introduced scientific techniques for preventing famine in Mexico, according to the university.

Until recently, he traveled worldwide working for improvements in agricultural science and food policy, said Kathleen Phillips, a university spokeswoman.

Borlaug was known as a champion of high-yield crop varieties, and other science and agricultural innovations to help fight hunger in developing nations. iReport.com: Tour Borlaug's boyhood farm

"We all eat at least three times a day in privileged nations, and yet we take food for granted," Borlaug said recently in an interview posted on the university's Web site.

"There has been great progress, and food is more equitably distributed. But hunger is a commonplace, and famine appears all too often."

He was awarded the Presidential Medal of Freedom in 1977, and the Congressional Gold Medal in 2006, according to the university's Web site.

The agriculture institute at the university was named after him in 2006.

Borlaug also created the World Food Prize, which recognized the work of scientists and humanitarians who have helped fight world hunger through advanced agriculture, the university said.

A memorial service will be held at the university at a later date.