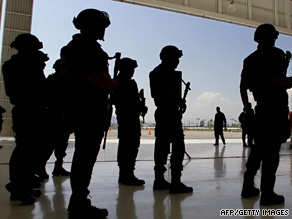 Most of those arrested were municipal police officers, but there also were some high-level state and federal officials, according to the Mexico attorney general's office.

Hidalgo is in central Mexico. Los Zetas was formed about 10 years ago by Mexican army commandos but now consists mainly of former local, state and federal police.

"The Zetas have obviously assumed the role of being the No. 1 organization responsible for the majority of the homicides, the narcotic-related homicides, the beheadings, the kidnappings, the extortions that take place in Mexico," said Ralph Reyes, the U.S. Drug Enforcement Agency's chief for Mexico and Central America.

All About Drug Trafficking • Mexico