HAVANA, Cuba (CNN) -- Hundreds of thousands of people packed a main square in the Cuban capital Sunday to witness a rare and ambitious concert that, despite its nonpolitical theme, drew criticism from some Cuban exiles in the United States. 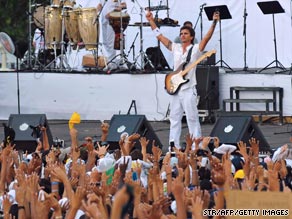 Colombian singer Juanes, creator of the "Peace without Borders" concert, performs at Sunday's event in Havana.

Colombian singer Juanes -- a 17-time Latin Grammy winner -- brought 15 international artists to Havana for Sunday's "Peace without Borders" concert. All of the artists wore white as a symbol of peace.

"I can't believe what my eyes are seeing," Juanes said on stage, describing the sea of people as a "beautiful dream."

Sunday's event was Juanes' attempt to connect isolated Cubans with the rest of the region, including the United States. The decades-old U.S. embargo on Cuba is the most visible manifestation of the communist country's political isolation.

The crowd cheered when Juanes said, "We are all brothers, and we all have to be connected."

But the reaction in Miami, Florida, home to both Juanes and a large Cuban exile community, has not been entirely peaceful.

Juanes has received death threats over the concert via Twitter, he said, and his home in Miami is under police protection.

Some Cuban exiles in Florida have called the concert a declaration of war, smashing his records in a public anti-Juanes demonstration.

Juanes sang with Cuban performers barred from visiting the United States, like Silvio Rodriguez. But missing from this concert were Cuban-American performers like Gloria Estefan and Willy Chirino, fierce critics of the Cuban government.

"We asked the government and we asked Willy and we asked Gloria and we tried," Juanes said. "But at this time it's not going to happen. It's not in our hands. But we really tried."

Chirino said Juanes' project will only benefit the Communist authorities.

"The revolution is going to win," Chirino said, referring to the government established by Fidel Castro more than 50 years ago. "An old system that's dying already, you know, they're going to give it oxygen."

"I think Juanes' idea is brilliant and it's full of love. Nobody is against an artist going to a country and bringing his or her work to the people," he said.

Concert officials said more than 1.1 million people attended Sunday's event, though some other estimates were lower. What seemed certain was that this was the largest staged event at La Plaza de la Revolucion since Pope John Paul II said Mass here in front of an estimated 850,000 people in 1998.

The concert was the second "Peace without Borders" show. A previous concert in Colombia aimed to ease tensions between that country and neighboring Venezuela.

Juanes said the reaction to Sunday's concert neither surprised nor deterred him.

"I mean, we knew that this was going to happen," he said in a statement on his Web site.

"I have been living in Miami for seven years, and the first time I visited Miami was 10 or more years ago, so I know what happened in Miami with the Cuba issue and with all these things before [we decided] to go to Cuba to do this event.

"I deeply regret having caused, let's say, this bad moment," he said.

He said he had spoken to Cuban exile leaders in Miami to explain his motives.

Both countries helped him overcome obstacles typical to big, free events staged by foreigners in Cuba -- a lack of visas and expensive sound and stage equipment.

He told the official Cuban youth newspaper Juventud Rebelde that he would like to stage the same concert with the same artists in Miami.

Thirty-six Cuban dissidents gave their blessing, signing a petition in favor of the concert.

"We think Juanes' initiative is good because it can help bring about national reconciliation and unity among Cubans," Castro opponent Oscar Espinosa Chepe said.

And Cubans seemed delighted by their first chance in decades to hear international top-caliber Latin stars.

CNN's Soledad O'Brien and Shasta Darlington contributed to this report.