TEGUCIGALPA, Honduras (CNN) -- The de facto president of Honduras denied Wednesday that his government turned off the power at the embassy where deposed President Jose Manual Zelaya surprisingly reappeared this week, and said that the people inside were free to come and go. 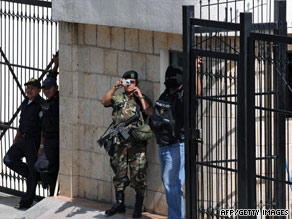 A soldier takes a picture Wednesday of the Brazilian Embassy in Tegucigalpa, Honduras.

Honduran forces also will not enter the Brazilian embassy, where Zelaya has been housed since Monday, de facto President Roberto Micheletti said in an interview with CNN en Español.

But these developments do not spare Zelaya, who was ousted in a June 28 coup, from being arrested and facing charges for violating the constitution if he leaves the safe haven of the embassy, Micheletti said.

Despite local reports citing police officials that authorities turned off the power to the embassy and surrounding area ostensibly to discourage looting, Micheletti said that a congregation of pro-Zelaya protesters at the embassy short-circuited the power themselves.

As of Wednesday, power was restored to the building, Micheletti said.

Zelaya's announced return has re-ignited a stand-off between the two disputed leaders of Honduras. Brazil now finds itself involved because of its embassy.

In another development, Micheletti said he is willing to meet anywhere with ousted President Jose Manuel Zelaya as long as Zelaya agrees to abide by presidential elections scheduled for November 29. But the de facto leader said in a statement read by his foreign minister Tuesday that his offer to talk with Zelaya does not nullify an arrest warrant issued against the ousted president by the nation's Supreme Court.

"I think that what the whole world should understand about this country is that there is no immunity for anyone -- for anyone," Micheletti told CNN en Español. "And, no one can be above the law."

Micheletti's willingness to engage Zelaya seemed to be a reversal of his position. On Tuesday, he had said in an interview with local network Televicentro that Zelaya's sudden appearance would not revive negotiations to have him return to power.

The United States and Brazil have said they support dialogue between the two sides, centered on the San Jose Accord, an agreement negotiated by Costa Rican President Oscar Arias. That deal calls for Zelaya to be restored to power.

The Brazilian request for a Security Council meeting came after the Honduran government isolated the embassy by cutting water, power and phone lines to the building, U.S. State Department spokesman Ian Kelly confirmed to reporters Tuesday in Washington.

This was the same action that Micheletti denied Wednesday.

Micheletti said that other nations have not given his government a fair hearing of its position.

"This is what we Hondurans want: to be heard, for them to read our constitution, to read our laws, and to see what happened before June 28," Micheletti said.

The de facto government argues that Zelaya was not removed in a coup, but in a constitutional transfer of power.

Zelaya, a centrist whose politics took a strong turn to the left once in office, was ousted in a June 28 military-backed coup. Despite increasing political, diplomatic and economic isolation, Micheletti has steadfastly resisted pressure to allow Zelaya to return to power and Micheletti thwarted two very public attempts by Zelaya to return to his homeland.

"Yes, we are alone, but we are surviving," Micheletti said. "Two months ago, people didn't think we would withstand all this time, but here we are almost three months later."

Amnesty International issued a statement Wednesday in which the human rights group "denounced a sharp rise in police beatings, mass arrests of demonstrators and intimidation of human rights defenders in Honduras since the June coup d'état and warned that fundamental rights and the rule of law in the Central American nation are in grave jeopardy."

The organization said police fired tear gas Tuesday at a building housing a prominent human rights organization. Around 100 people, including women and children, were inside, Amnesty International said. Many were there to denounce what they said were police abuse while breaking up the demonstration outside the Brazilian Embassy, the rights group said.

"The situation in Honduras can only be described as alarming," said Susan Lee, Americas director at Amnesty International. "The attacks against human rights defenders, suspension of news outlets, beating of demonstrators by the police and ever increasing reports of mass arrests indicate that human rights and the rule of law in Honduras are at grave risk."

It was still not publicly known Wednesday how Zelaya got into the country and he declined to provide details, only telling CNN en Español on Tuesday that it was a 15- to 16-hour trip he took "with the help of Hondurans."