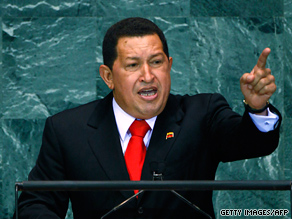 In a rambling speech at the U.N. General Assembly, Chavez spoke highly of current President Obama, saying he is an "intelligent man" and comparing him to President John F. Kennedy.

"I hope God will protect Obama from the bullets that killed Kennedy," he said. "I hope Obama will be able to look and see, genuinely see, what has to be seen and bring about a change."

Three years ago, Chavez spoke at the gathering the day after Bush spoke, and said the lectern "still smells of sulfur."

But on Thursday he looked around the podium and said, "It doesn't smell of sulfur. It's gone. No, it smells of something else. It smells of hope."

He did, however, criticize some U.S. policies, questioning whether there are "two Obamas."

Chavez accused the Pentagon of being behind the ousting of Honduran President Jose Manuel Zelaya in a military-backed coup in June. "American soldiers knew about the coup and supported it," he said. "Hence the contradiction that Obama has to face. Are there two Obamas? Obama spoke here yesterday. Does he have a double? ... Let's hope the one we heard yesterday will prevail. Let us hope. That's what the world needs."

The United States and Brazil have said they support dialogue between Zelaya and de facto President Roberto Micheletti, centered on the San Jose Accord brought about through the mediation of Costa Rican President Oscar Arias and the Organization of American States mission. That deal calls for Zelaya to be restored to office.

"The U.S. government, and this is strange, has not recognized the fact that a military coup d'etat has occurred," Chavez said. "There is some friction between the State Department and the Pentagon."

He said the coup was engineered by the Honduran bourgeoisie, "four or five wealthy, powerful families."

Chavez also called for the United States to lift what he called the "savage, murderous blockade" on Cuba, and was critical of plans to open U.S. military bases in Colombia, saying what the nation needs instead is aid to lift itself out of its civil war.

In addition, Chavez criticized capitalism and extolled the virtues of socialism, saying it is "the road to salvation for this planet."

He spoke for almost exactly an hour, less than the hour and 36 minutes Libyan leader Moammar Gadhafi used on Wednesday. The Venezuelan president joked that he would not speak as long as Gadhafi, but said he planned to speak as long as Obama.

Asked to expand on his "two Obamas" comment at a news conference after his speech, Chavez said, "I think that one of the serious failures of the United States has been that, for a long time, it has underestimated and undervalued Latin America and the Caribbean. ... I hope that Obama turns around the vision of the White House and the Department of State of Latin America. They cannot continue to mistreat us."

He said one Obama spoke about peace in addressing the General Assembly, yet has seven U.S. military bases in Colombia. "There's a double somewhere," he said.

Asked by a reporter about the closures of television stations in Venezuela, Chavez said it was "a big lie" and asked her to provide an example. She asked about RCT, or Radio Caracas Television. Chavez told her the station broadcasts every day, but that a contract, or concession, had expired for its "open signal" and was not renewed.

"Never in Venezuela do we have as much freedom of expression as we do now," he said.

But, he asked, "What would happen here in the United States if CNN and other stations supported a coup? Not only would they be shut down, but their owners would have been taken to the electric chair."