TEGUCIGALPA, Honduras (CNN) -- Former President Carter has contacted the de facto president of Honduras to urge a resolution to the crisis in the Central American country. 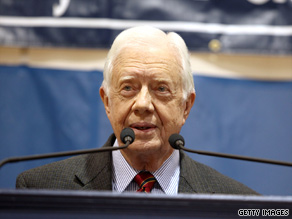 Former President Carter has expressed "his concern about the current situation" in Honduras, a spokeswoman says.

"President Carter has been in touch with the Honduran government to express his concern about the current situation," spokeswoman Deanna Congileo said via e-mail Thursday.

"He is not offering himself as a mediator, but rather supporting the mediation of [Costa Rican] President Oscar Arias and the Organization of American States mission."

Micheletti said he told the former U.S. president he was "willing to enter into dialogue, anywhere and at any time, to try to find a resolution to the present situation."

But he insisted that deposed Honduran President Jose Manuel Zelaya publicly recognize the "sanctity" of elections scheduled for November.

Zelaya told CNN that Carter had not called him.

Zelaya was ousted in a military-backed coup on June 28. He secretly returned to Honduras this week and is taking refuge in the Brazilian Embassy in the capital, Tegucigalpa.

Watch the scene outside the embassy »

The United States and Brazil have said they support dialogue between the two sides centered on the San Jose Accord negotiated by Costa Rica's Arias. That deal calls for Zelaya to be restored to office.

Micheletti denied Wednesday that his government turned off the electricity at the Brazilian Embassy and said people inside were free to come and go.

Honduran forces also will not enter the embassy compound, Micheletti said in an interview with CNN en Español.

Zelaya told CNN the military forces outside the embassy played loud music and made other noise at night, making it difficult for him to sleep.

The ousted president still faces arrest and charges for violating the constitution if he leaves the embassy, Micheletti said.

"I think that what the whole world should understand about this country is that there is no immunity for anyone -- for anyone," the de facto president told CNN en Español. "And no one can be above the law."

The de facto government argues that Zelaya was not removed in a coup but in a constitutional transfer of power.

Zelaya's announced return has reignited a standoff between the two men, who both claim to be the leader of Honduras.

Brazil -- which now finds itself involved because of its embassy -- wants an emergency U.N. Security Council meeting to discuss the situation, the official Brazilian news agency has reported.

Amnesty International on Wednesday denounced "a sharp rise in police beatings, mass arrests of demonstrators and intimidation of human rights defenders in Honduras since the June coup d'etat," and warned that "fundamental rights and the rule of law in the Central American nation are in grave jeopardy."

The organization said police fired tear gas Tuesday at a building housing a prominent human rights organization. Around 100 people, including women and children, were inside, Amnesty International said.

It was not publicly known how Zelaya got into the country, and he declined to provide details, telling CNN en Español earlier that he undertook a 15- to 16-hour trip "with the help of Hondurans."