(CNN) -- Deposed Honduran President Jose Manuel Zelaya said Thursday night he has rejected a proposal by the man who replaced him after a June coup that they both resign and make way for a third person to take over. 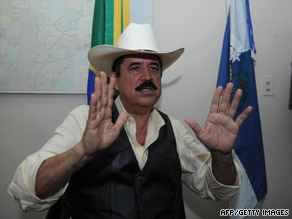 The proposal was made in person by a delegate for de facto President Roberto Micheletti, Zelaya said in an interview with CNN en Español. Zelaya said the unnamed delegate visited him Wednesday night in the Brazilian embassy in the Honduran capital of Tegucigalpa, where he has been holed up since secretly returning to the country Monday.

"This is not acceptable," Zelaya said about the proposal, adding that it would just mean replacing one leader put into power by a coup with another non-elected president.

Earlier Thursday, Zelaya said in an interview with CNN's Rick Sanchez that he never lost the title of president though he was removed from power in the June 28 coup.

"I am the president of Honduras and I'll stay here in the Brazilian embassy as long as it takes," he said.

Watch Zarrella report on the situation in Honduras »

Zelaya told CNN en Español that he no help from any outside nations in returning to Honduras. He said reports by Brazilian officials that Venezuelan President Hugo Chavez helped him are "absolutely false." Only Honduran citizens helped him, Zelaya said. He said earlier this week the trip took 15 to 16 hours.

The ousted leader also said conditions had improved at the embassy in the past day. He had complained earlier in the week that Micheletti's government had shut off electricity and water to the embassy and was impeding food deliveries.

Authorities had said they turned off power to the embassy and surrounding area to discourage looting, but Micheletti has said that pro-Zelaya protesters at the embassy short-circuited the power themselves.

Micheletti again denied on Thursday turning off the power.

Micheletti told Sanchez his government is not in contact with Brazilian officials, but said Zelaya would not be removed from the embassy.

"We are serious people," he said. "We're going to let him stay wherever he wants."

Earlier this week, Micheletti said Zelaya would be arrested and face charges for violating the constitution if he left the embassy.

"President Zelaya should present himself before the tribunals of justice in our country where he has charges against him," Micheletti said in a Wednesday interview with CNN en Español.

Zelaya has denied violating the constitution.

Asked whether officials would allow CNN to enter the embassy to interview Zelaya, Micheletti said, "Please, please. I beg you. Come down here. But don't just stay only in the Brazilian embassy. Go to all over the country and find out the real true country. Please, come."

CNN reporter John Zarrella said previously that authorities would not let him into the embassy to interview Zelaya.

A nationwide curfew was lifted Wednesday, but a tight security cordon remained in the area around the embassy.

Micheletti said police were stationed there because people inside the embassy requested the protection.

"We are not impeding the exit nor the entrance of absolutely anybody," Micheletti said.

Zelaya said in the interview with CNN en Español that he been meeting with political and religious leaders who visited him at the embassy.

Micheletti has maintained that Zelaya was not removed in a coup, but in a constitutional transfer of power.

All About Honduras • Jose Manuel Zelaya