Rio's victory is a victory for Lula da Silva, too

(CNN) -- The 63-year-old bearded fireplug of a man erupted in tears, pulled a white handkerchief from his back pocket, carefully unfolded it and pressed it into his eyes, pulled it away, pressed it again to his eyes, this time with more force, pulled it away again just long enough to take a sip of water, then rubbed them again. 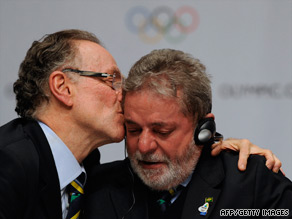 "I've never won a gift before," Brazilian President Luiz Inacio Lula da Silva told reporters. "The first gift I ever had in my life I had to buy. It was an old bike with a broken belt and I had to fix it. Today, people who don't even know me gave me the greatest gift that a president could have: to host the Olympic Games in Rio de Janeiro. Rio deserves this because Rio is a city that has suffered."

For Lula da Silva, Friday's announcement in Copenhagen, Denmark, that Rio de Janeiro will host the 31st Olympiad in 2016 signified a major achievement not only for his hemisphere (no city in South America has ever before hosted the games) but for him -- a former autoworker and union organizer who defied dizzying odds to become president.

Lula da Silva was born to a peasant family in one of northeastern Brazil's most impoverished areas and migrated as a young man to a city near São Paulo, where he worked as a metalworker, losing his left pinky finger in the process.

In the 1970s, he became a union leader, said Luiz Valente, chairman of the department of Portuguese and Brazilian studies at Brown University in Providence, Rhode Island.

During the years of military rule from 1964 until 1985, the government cracked down on unions. But Lula da Silva acquired a reputation as a public figure by leading a successful strike in São Paulo, Valente told CNN in a telephone interview.

"He was able to negotiate a favorable contract for his union but, from a political standpoint, he demonstrated that worker strikes were possible again in Brazil," Valente said.

In the late 1980s, he ran for Congress and won, but he chose not to run for re-election. Instead, he set his sights on the top job, waging a losing presidential campaign in 1989, the country's first presidential election since 1960. Successive tries in 1993 and 1997 were unsuccessful, but in 2001, he won and quickly surprised many observers.

In fact, Brazil's economic policy has been "pretty much middle of the road, some people would say pretty conservative," said Valente, who added that he has never voted for Lula da Silva.

But Lula da Silva has worked to help the country's poor, introducing populist measures intended to lower the incidence of poverty and making other moves, Valente said.

"As a union leader during the military dictatorship, he learned how to negotiate with the so-called enemy," Valente said. "So Lula is going to try to reach some kind of consensus, and he did. What he did was not a product of ideology but of a pragmatist attitude of the government of Brazil."

Lula da Silva's moderate modus operandi has gained him popularity at home, where he has made no moves toward abolishing the term limits that preclude his running for a third term next year, Valente said.

That pragmatism has served him well on the international front, where he is on good terms with the leftist governments of Venezuela, Bolivia and Ecuador as well as with the United States and the European Union. "Lula knows how to play the game," Valente said.

Like Brazil's president, Rio did not succeed on its first try, having been rejected in an earlier bid -- which inspired planners to be meticulous, Valente said.

"They were very well-prepared," he said.

Indeed, the city two years ago hosted the Pan-American Games, which officials looked on as a trial run for the Olympics, he said. "Everything ran without a hitch," said Valente. "It was just a beautiful event."

Lula's waterworks were no surprise to his countrymen, the professor said. "He's a very emotional guy and Brazilians tend to be emotional. They're certainly not ashamed of showing their emotions ... It's not unusual for Brazilian men to cry in situations like that. Brazilians actually like to see men cry. They think it's good to show your emotions."

Watch the reaction as Rio de Janeiro, Brazil, is named host city for the 2016 Olympics »

"He always cries when he talks of his mother, who never saw him become president," said Fabiana Frayssinet, CNN's correspondent in Rio de Janeiro. "He's a man who cries, who gets mad. He's an emotional man who says what he thinks whenever he wants."

Emotions were on display Friday on Copacabana beach in Rio, where thousands of people flocked on the first sunny day after two weeks of rain and atypically cold weather.

"It was a mix of the end of a football championship with a ... carnival and all the Brazilian festivals," Frayssinet said.