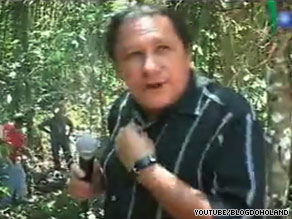 Wallace Souza was expelled from the state congress last week, stripping him of his legislative immunity.

Wallace Souza was expelled from the state congress last week, stripping him of his legislative immunity from prosecution and opening the way for authorities to charge him with several crimes, the Amazonas State Legislative Assembly said on its Web site. The vote was 12-4, the assembly said.

Souza's arrest was ordered earlier this week but state police cannot find him and consider him a fugitive, said Cristiane Silveira, an Amazonas state police spokeswoman.

Police interviewed Souza's family members, who say they have not heard from him since the vote that stripped him of immunity, Silveira said.

Souza previously denied the accusations, and his lawyer criticized key testimony and questioned the investigation.

"In all the investigations carried out by the public minister and the police, up to now they have not presented any technical evidence of any type," attorney Francisco Balieiro said on Brazilian TV in August.

Authorities said this summer that Souza, the former host of a police TV show called "Canal Livre," ordered that criminal rivals be killed and then would have his TV camera crews arrive first on the scene. The killings not only got rid of drug-trafficking competition, but also drove up ratings, officials said.

State Attorney General Otavio Gomes told the Agencia Folha news outlet that Souza's gang was linked to six slayings. But prosecutor Pedro Bezerra told the news outlet he could not bring murder charges against Souza for lack of concrete evidence.

The Amazonas State Justice Tribunal, which held a hearing on the accusations, said the criminal complaint was based on testimony by former Souza associate Moacir Jorge da Costa. After Jorge's arrest, officials said, he revealed details of the gang's reputed activities, including slayings.

Souza's lawyer, Balieiro, said this summer that police and public ministry officials did not have standing to investigate the TV show host because he was a legislator. That point now appears moot with Souza's expulsion from the state assembly.

According to the state public minister who brought the charges against Souza, the legislator's son, Raphael, belonged to the criminal gang. Raphael Souza has been convicted of homicide, drug trafficking and illegal gun possession, according to authorities.

He lived in the jungle city of Manaus, the capital of Amazonas state, a region known for its prevalent lawlessness. Souza would often rail on his lunchtime show about the killings and other atrocities being committed in the area.