(CNN) -- American tourists heading to Mexico's Baja California state in the future can expect more police protection from a new task force, according to Mexican authorities. 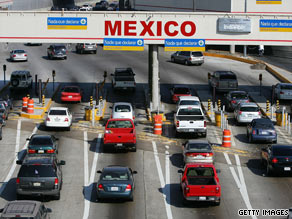 Mexican officials want to make sure the tourist traffic continues to flow into Tijuana.

Officials from the Baja California cities of Tijuana, Ensenada and Rosarito gathered earlier this week to announce the creation of the task force, which will be made up of bilingual officers and which will be designed primarily to serve Americans.

The initial plan, according to Ensenada Secretary of Public Safety Cesar Santiesteban, is to create a force that patrols a 50-mile tourist corridor from Tijuana through Las Playas Rosarito to Ensenada in Baja California, which is Mexico's northernmost and westernmost state.

There were no immediate details as to when the task force would go into operation or how many officers would be in the unit.

City officials in San Diego, California, said the city's police force would extend help in ways that Mexican officials deemed necessary in getting the task force up and running, including training the officers.

"We've always prided ourselves in our working relationship with our friends to the south," San Diego Mayor Jerry Sanders, said. "When you look at it, we're really one community."

For a region whose reputation has been tarnished by ongoing drug-fueled violence, plans for task force couldn't come soon enough. Policing the drug war has proven complicated for Mexican authorities, including the military, and also hindered the tourism industry in Mexico.

American travelers, who represented 80 percent of the country's booming $13 billion travel industry last year, are a critical part of Mexico's economy. In 2008, more than 18 million Americans visited the country, according to the Mexico Tourism Board.

In some areas, hotels and local businesses are struggling to recover from low visitor numbers, according to the Mexico Tourism Board.

Tijuana Mayor Jorge Ramos said tourism in Baja California in the past two years has remained steady, and the task force was set up to create a stronger police presence for tourists.

"We're here on this side of the border to invite you to our city and to [show you] we're making a lot of things ... better, and to make some progress in our city," Ramos said in a news conference in San Diego Monday.

All About Baja California • Mexico • Tourism