Use of mercenaries in Honduras on the rise, U.N. panel says

(CNN) -- A group of independent U.N. experts expressed concern Friday over the increased use of mercenaries in Honduras, where a de facto president has been in power since a military-led coup in June. 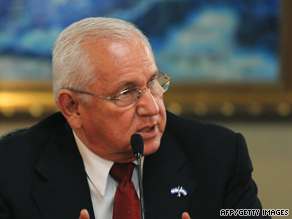 Roberto Micheletti has insisted the June ouster was accomplished through constitutional means.

The U.N. panel said it received reports that 40 former Colombian paramilitaries had been hired to protect properties and individuals in Honduras since the June 28 coup that ousted President Jose Manuel Zelaya. The panel also heard reports that 120 mercenaries from various Latin American countries had been contracted to support the government of Roberto Micheletti, who was installed as president hours after Zelaya's removal.

"We urge the Honduran authorities to take all practical measures to prevent the use of mercenaries within its territory and to fully investigate allegations concerning their presence and activities," the U.N. panel said in a news release.

The U.N. experts accused the Honduran government of indiscriminately using sound-generating devices against Zelaya and his supporters at the embassy.

The experts noted that the recruitment, use, financing and training of mercenaries is prohibited under the International Convention on the issue, which Honduras has signed. The panel was established in 2005 by the Commission on Human Rights, which has since been succeeded by the Human Rights Council.

The United Nations and the European Union have condemned the coup and have refused to recognize Micheletti, who has insisted that Zelaya, who was elected president in January 2006, was not overthrown but was replaced through constitutional means.

The political crisis stems from Zelaya's desire to hold a referendum that could have led to extending term limits by changing the constitution, even though the country's congress had outlawed the vote and the Honduran Supreme Court had ruled it illegal.

Zelaya, who was flown out of the country the day of the coup, secretly returned to Honduras on September 21 and has taken refuge at the Brazilian Embassy in Tegucigalpa, the nation's capital.

In another development Friday, the Amnesty International human rights group said Honduras must allow opposition journalists to broadcast during negotiations over the country's political future.

Radio Globo and the Canal 36 TV station have been closed since September 28, when Micheletti suspended many of the nation's civil liberties.

Micheletti said Monday he was lifting the emergency measures, but Amnesty International says security forces continue to hold equipment from both media outlets.

Police have told legal representatives of the radio and TV station that the confiscated equipment was required for an investigation, Amnesty International said in a news release.

A delegation from the Organization of American States arrived in Honduras on Wednesday and met separately with Zelaya and Micheletti. The OAS group left Thursday without any agreement being reached.

An accord forged by Costa Rican President Oscar Arias calls for Zelaya to be reinstated, but Micheletti has vowed that the ousted president will never return to power.

All About Honduras • Organization of American States • United Nations