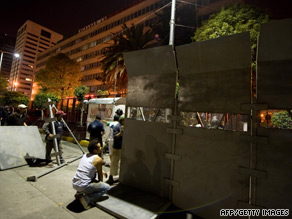 Police erect a barrier outside the offices of Luz y Fuerza del Centro in Mexico City.

Hundreds of federal police officers seized the facilities of the company, Luz y Fuerza del Centro, in Mexico City and the states of Hidalgo, Mexico, Morelos and Puebla.

Luz y Fuerza del Centro is a decentralized public agency, incorporated as a company with its own assets.

The government dissolved the company because "its operations are no longer beneficial from the point of view of the national economy or the interests of the public," Gomez Mont said at a news conference.

The Federal Electricity Commission, known by its Spanish initials, CFE, will take over operations. Service will be uninterrupted, the government said.

At the current rate, the government would have to subsidize the company to the tune of 300 billion pesos (U.S. $22.5 billion) by 2012, the minister said.

The utility had also been ensnared in a labor dispute between federal officials and a union representing Luz y Fuerza del Centro employees.

The Mexican Electricians Union, one of the most powerful in the country, represents about 60,000 workers.

"They have declared war and we are going to respond, exercising our constitutional rights and guarantees, let there be no doubt about that," the union said in a statement Sunday.

Union supporters organized a protest march to the interior ministry Sunday to demand an audience with Gomez Mont.

Union leaders were not available for comment Sunday morning because all of the directors were participating in the march, a union employee told CNN.

The government cited labor rules imposed by the union as a cause of the inefficiency.

"Practically all of the decisions of Luz y Fuerza del Centro had to be taken to serve the demands of the union and not in the interests of the consumers," Gomez Mont said.

The minister also said the union continued to grow its workforce to benefit itself and not the company's operations.

The federal government will honor the terms of the collective bargaining agreement regarding the laid-off workers, he said, and will pay the pensions of retired employees.

The move does not signal a shift toward the privatization of electric utilities, Gomez Mont said.

Early this month, members of the Mexican Electricians Union demonstrated outside the president's residence to demand recognition of their leader. On Monday, the government refused to recognize Martin Esparza, alleging a fraudulent election process.