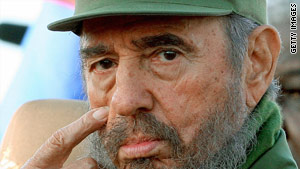 Fidel Castro's sister Juanita worked for the CIA for 8 years.

(CNN) -- Juanita Castro, the younger sister of Cuban leaders Fidel and Raul Castro, worked for the CIA during some crucial years of the Cold War, she says in her new memoir.

Juanita Castro, originally a supporter of the Cuban revolution that brought Fidel Castro to power in 1959, said she became disillusioned by growing injustice.

In the book, Juanita Castro said she was introduced to the world of the CIA through a close friend on the island nation, Virginia Leitao da Cunha, wife of the Brazilian ambassador to Cuba in the early 1960s.

In June 1961, under the guise of visiting her sister Enma in Mexico City, Castro met a CIA agent who called himself "Enrique," the memoir says.

In those first meetings in Mexico, which took place shortly after the failed Bay of Pigs invasion, Enrique asked the young woman about general information regarding Cuba since the revolution, and then asked whether she would work for the agency, according to the book.

The job that Enrique described was to help protect CIA agents working in Cuba, Castro said.

"The CIA has people in Cuba. Some could be discovered or already have. The mission is to protect them and move them from one place to another, providing the most security possible," the agent told her, according to the book.

The CIA declined to comment on the book's claims. Her first mission was to deliver documents, money and messages hidden in canned goods from Mexico to Cuba, according to the book.

Castro wrote that she agreed to help on the condition that she would not do anything violent against her brothers. She also refused payment when it was offered, she said.

The CIA communicated through a short-wave radio. At an appointed hour daily, if the waltz "Fascination" aired on the radio, Castro would know that a message would follow. An overture from "Madame Butterfly" meant that no message was coming, according to the book. A special code was made up of numbers, which Castro would decode with a manual, she wrote.

Video: No cars, no traffic in Cuba

The period of her cooperation, from 1961 to 1969, included the Cuban Missile Crisis, which changed the way the Cold War was being waged. To resolve the crisis, the Soviet Union agreed to dismantle the missiles it had placed in Cuba in exchange for assurances that the United States would not invade Cuba.

In 1964, Castro decided to leave Cuba for good, becoming an exile in Miami. She worked with anti-Castro exile groups there, and continued to cooperate with the CIA, according to the book.

The relationship ended when U.S. policy toward the Soviet Union changed during Richard Nixon's presidency. As tensions eased with the Soviet Union, the United States would no longer back anti-Castro exiles, two CIA agents told her.

When they asked her to use her influence to downplay rhetoric of a communist threat, she quit.

The Cuban government had no immediate response to the publication of the book, Jorge Bolanos, chief of the Cuban Interest Section in Washington, told CNN en Español on Monday.

"I haven't received any reaction from the Cuban government," he said. "I am not in the position to comment about a book which I have not read yet."

CNN's Mariano Castillo and Carol Cratty contributed to this report.