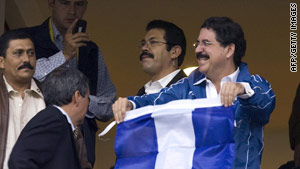 (CNN) -- Negotiators for deposed Honduran President Manuel Zelaya and de facto President Roberto Micheletti have reached an agreement to form a government of national reconciliation that could reinstate Zelaya.

"My government has decided to support a proposal that allows a vote in the National Congress, with a previous opinion of the Supreme Court," to decide whether the ousted leader will be reinstated ahead of national elections next month, Micheletti said in a statement. The deal contains no guarantee that Zelaya would return to power.

"This is an agreement that benefits Honduras, the people of Honduras, and democracy in Honduras," said Victor Rico, political affairs secretary for the Organization of American States, who was involved in the negotiations.

U.S. Secretary of State Hillary Clinton praised the deal while she was on a diplomatic trip in Pakistan.

"Congratulations for reaching a historic agreement," she said from Islamabad. "I'm looking forward to elections and a full restoration of democracy."

The United States had pressed for a resolution to the political crisis before a scheduled November 29 presidential election. Many countries and international bodies had indicated that they would not recognize the results if the elections were held under the Micheletti presidency.

Zelaya has been holed up inside the Brazilian Embassy in the Honduran capital, Tegucigalpa, since sneaking back into the country on September 21. There was no immediate comment from him on the agreement.

The political crisis stems from Zelaya's plan to hold a referendum that could have changed the constitution to allow longer terms for the president.