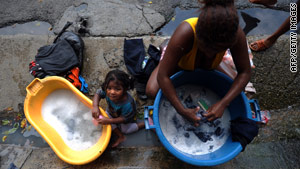 A resident of Caracas washes clothes in the street; the government has imposed water rations due to drought.
STORY HIGHLIGHTS
RELATED TOPICS

Caracas, Venezuela (CNN) -- Residents of the Venezuelan capital on Monday began to experience water rationing as part of a government preservation measure during a drought.

The rolling cuts to water service will affect the capital of Caracas and some nearby areas for periods of up to 48 hours, the state-owned water utility Hidrocapital announced. The rationing will continue through the first quarter of 2010, the government said.

President Hugo Chavez has urged citizens to take extra steps to reduce water use, including a suggestion last week that taking a shower should take only three minutes.

The government says that weather phenomena are behind the drought, while critics of Chavez say that years of lack of infrastructure investment and planning left the country flat-footed when it came to offsetting the drought.

Drought conditions have reduced reservoir volume to critical levels, officials say. The level of the Camatagua Reservoir, which supplies Caracas with about half of its water, has been on a downward trend since 2007, according to data from Hidrocapital. However, it's not as low as during the early 2000s. Some water-rationing measures were taken at the time, too, according to Hidrocapital.

In Miranda State, which sits adjacent the capital, the Lagartijo Reservoir is at the lowest level ever recorded.

"There will be programmed interruptions in service, with the goal of recuperating the levels of the principal reservoirs that flow to the city and that were affected by the scarce rains this year," Hidrocapital President Alejandro Hitcher said at a news conference announcing the rationing.

Even schools will have to deal with the water shortages, the government said. Only hospitals will be equipped with water around the clock.

Critics, including the municipal agency that distributes Hidrocapital's water to the city, say that poor infrastructure has made it difficult for water pressure to reach some of the poorest parts of the city, according to local reports.

The government says that the El Nino phenomenon -- unusually warm waters in the equatorial Pacific that affects weather around the globe -- is behind the dry conditions.

Venezuela's National Institute of Meteorology and Hydrology also pointed a finger at something called quasi-biennial oscillation, which affects winds in the stratosphere.

"This other phenomenon," the institute said in a statement, "has a relationship with the rains, and is capable of modifying or changing the magnitude and impacts of the effects that El Nino has brought."

Journalist Maria Carolina Gonzalez contributed to this report for CNN.