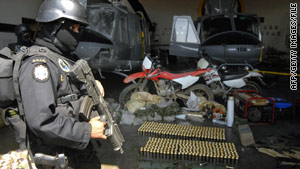 Mexico City, Mexico (CNN) -- The reputed leader of the Zetas drug cartel in the Mexican state of Veracruz was killed in a gunbattle with federal authorities, the Mexican attorney general's office has said.

Braulio Arellano Dominguez, also known as "El Gonzo," "Zeta 20" or "El Verdugo," was mortally wounded when federal police and sailors went to search a house in the city of Soledad de Doblado, the attorney general said in a release Tuesday.

Arellano Dominguez opened fire with a .38-caliber revolver and was wounded in the firefight, officials said. He died while being transported to a hospital.

Three other suspects were arrested.

Veracruz is in southeastern Mexico on the Gulf of Mexico coast.

Originally formed as the Gulf drug cartel's enforcement wing, the Zetas increasingly have branched out on their own.

More than 12,000 people have been killed since President Felipe Calderon declared war on the drug cartels after taking office in December 2006. He has deployed thousands of military personnel and federal police in his battle against the drug traffickers.