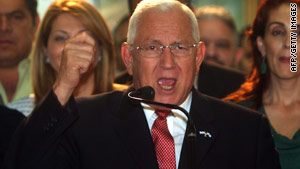 Roberto Micheletti gives a speech to announce the formation of a unity government.

Making a late night public announcement, Micheletti said his entire cabinet had resigned to clear the way for a reconciliation cabinet to be named.

"This cabinet is a result of an ample participation of different sectors of civil society as well as the political parties," he said. "Tonight with this new government, we're answering the call for the unity of all people of Honduras."

He did not identify any of the new cabinet members.

Representatives for Micheletti and Zelaya signed an agreement October 30 to form a reconciliation government that would rule until a new president, to be chosen in a November 29 election, takes office in January. The deal included the possibility of Zelaya's reinstatement to the presidency, but contained no guarantee.

The pact called for the unity government to be named by Thursday. The agreement also stipulated that the nation's congress, in consultation with the supreme court and other institutions, would vote on whether Zelaya would be returned to power.

That vote did not occur Thursday.

Zelaya told local media that Micheletti's actions violated the accord, which he called "a dead letter." The reconciliation government, he said, must be led by the democratically elected president of Honduras.

"How can a person who has not been elected by anyone lead a government?" he said.

Zelaya was flown out of the country by the country's military June 28 but secretly returned to Honduras on September 21, obtaining refuge in the Brazilian Embassy.

Micheletti sent Zelaya a letter earlier this week asking him for the names of people the deposed president would like to have in the unity government. Zelaya did not answer the letter.

Micheletti said Zelaya's refusal to answer gave the interim president the right to name all the members of a new government.

"With this agreement, we have made an important step to strengthen our democracy," Micheletti said. "Despite the fact that Mister Zelaya did not send any of his representatives ... we're still looking for an opportunity for these citizens of Honduras to be integrated in the government of reconciliation."

The Organization of American States, the United Nations, the European Union and the United States condemned the coup and demanded that Zelaya be reinstated. The United States and others imposed economic sanctions, which some analysts say have started to hurt Honduras.

Many nations, including the United States, also said they would not recognize the winner of this month's presidential election if the vote is held under Micheletti's rule.

The United States seemed to shift that position after last week's accord.

Thomas Shannon, assistant secretary of state for Western Hemisphere affairs, told CNN en Español this week that the United States would recognize the winner of this month's presidential election even if Zelaya is not returned to power beforehand. Shannon played a key role in obtaining last week's agreement.