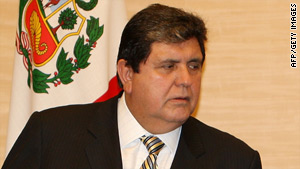 "We do consider, from the information that have received, that we need an explanation and sanctions to those involved," Foreign Minister Jose Antonio García Belaunde told CNN en Espanol Saturday.

He added that he does "not have all the elements of the story here in Singapore," but confirmed that the suspect is "under arrest and in the hands of the judicial power in Peru."

Garcia and his Chilean counterpart Michelle Bachelet had planned to attend a workshop Saturday with other world leaders, but the Peruvian leader canceled his agenda to return to Lima. However, there were no plans for a bilateral meeting between leaders from both countries, Belaunde said, dismissing reports that there had been such a session scheduled for Sunday.

Belaunde said he has spoken to Chilean Foreign Minister Mariano Fernandez Amunategui about the case, but that his counterpart would not have information until he returns to Santiago.

APEC's 21 member nations -- ranging from Thailand to United States, Chile to China -- represent more than half of the world's economic output. The forum sees its goal as "facilitating economic growth, cooperation, trade and investment in the Asia-Pacific region."

Chile and Peru have a history of animosity, having fought in the War of the Pacific from 1879 to 1883. Hard feelings linger to this day.

The two nations nearly came to war in 1975 when left-wing Peruvian leader Juan Velasco, who was backed by Cuba, wanted to invade Chile, which was led by right-wing Gen. Augusto Pinochet. The invasion was called off and Velasco was deposed in a coup a short while later. Tensions rose again when Peru discovered a Chilean spy mission, but war was averted.

More recently, tensions between the two South American nations flared in December after the revelation that Peru's top army general said at a party that Chileans in neighboring Peru would be sent back in coffins or body bags.

At the time, Peruvian Defense Minister Antero Flores-Araoz said relations between the two nations will be repaired, calling the incident involving Peruvian Gen. Edwin Donayre "a bump in the road." Bachelet had made similar assertions.

Also last year, the World Court agreed to look at an issue concerning Peruvian claims to a disputed maritime area.