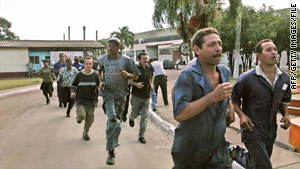 Havana, Cuba (CNN) -- Cuba is wrapping up its biggest military exercises in five years, saying it wants to be prepared in the event of a U.S. invasion.

Under the watchful eye of Cuban President Raul Castro, the armed forces is ending four days of extensive maneuvers, war-room strategy sessions and military parades across the island.

"This is a necessity of the first order," Gen. Leonardo Andollo Valdez said on state television.

"The political, military situation, which characterizes the confrontation between our country and the empire, can go from a relatively normal situation to a much more urgent, confrontational, aggressive one in a month, a week, or even in a night," he added.

Cuban television broadcast images of camouflaged troops firing from trenches and fighter aircraft dropping bombs. Many of the images are from exercises in previous years.

The exercises come amid a slight thaw in relations between the Cold War enemies.

President Obama has lifted restrictions on Cuban-American travel and remittances, and the two countries have resumed immigration talks. Obama recently said the United States has no intention of invading the communist island just 90 miles off its coast.

But the fear of an attack has been a constant concern here, and not without reason. In 1961, Washington backed an invasion by Cuban exiles bent on overthrowing Fidel Castro, the brother of Raul Castro and former president of Cuba.

They were defeated at the Bay of Pigs, but the United States has maintained an economic embargo, and Fidel Castro has survived numerous attempts on his life.

The massive military exercises began in 1980 and have been repeated every few years. The latest maneuvers, called "Bastion 2009," are the first since Raul Castro succeeded his brother and Obama assumed the White House.

Preparations for the exercises began in 2004, before either was in office. The exercises end Saturday, and on Sunday, Cuba will celebrate Day of Defense.