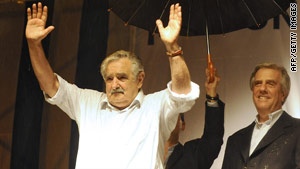 The streets of the South American country's capital were filled with Mujica's supporters, who cheered and honked their horns.

Mujica belongs to the same Broad Front Party as Vazquez, who is popular. Both men are considered leftists.

In a victory speech, Mujica said his administration will continue the policies of Vazquez.

"Tomorrow, the commitment continues," he said.

Mujica, 74, was imprisoned for 14 years and released in 1985 when democracy was restored to Uruguay after a 17-year dictatorship. He was minister of livestock and agriculture from 2005 to 2008 and is now a senator.

Mujica has played down his connection with the Tupamaros, who were defeated in 1973.

In his victory speech Sunday, Mujica called for unity and asked his followers not to offend those who voted for other candidates during the first and second rounds of voting.

His administration may make mistakes, but it will never turn its back to the problems facing the country, Mujica said.

Analyst Rosario Queirolo describes Mujica as "a person who somehow lives what he preaches and is an antipolitician in another way."

"He doesn't very well fit the image of a president we have in Uruguay," Queirolo said.

Uruguay is one of the smallest countries in South America, about the size of Washington state. But it is also considered one of the most economically developed.

Located on South America's southeastern coast, the country has a population of 3.5 million, 92 percent of whom live in urban areas.