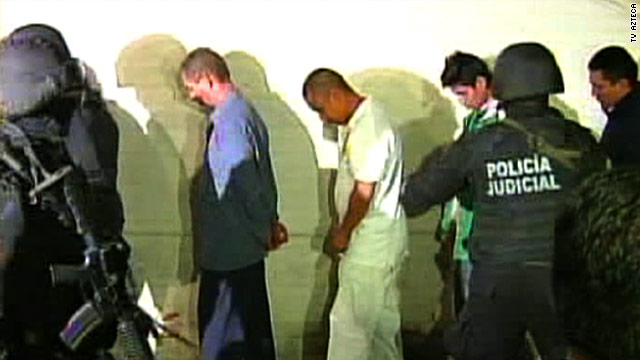 Police arrested 23 people in Thursday's raid on what they said was a house for slave laborers.
STORY HIGHLIGHTS

(CNN) -- Mexican authorities have freed 107 indigenous people who officials say were being held as slave laborers in a Mexico City factory disguised as a drug rehabilitation center.

The victims ranged from 14 to 70 years old, and some were tortured, Mancera told CNN affiliate TV Azteca. Some victims also suffered sexual abuse, he said.

"They were beaten," he said. "Several have wounds, serious wounds. We even have some of the victims with fractures."

All of the victims were suffering from severe dehydration and malnutrition, he said. Some were taken to a hospital.

The captives, some of whom speak only indigenous languages and no Spanish, were locked in the building, which had bars on the windows and a fence outside, he said.

They made handbags and clothespins and were not paid. Their only daily meal consisted of chicken legs and rotten vegetables, Mancera said.

"The vast majority of the food we found was spoiled," he said.

Video of the inside of the building showed filthy and crowded living conditions.

The men and women worked 8 a.m. to midnight and were given only a half-hour food break. They were not allowed to go to the bathroom, and many soiled themselves, officials said.

The attorney general labeled it "cruel and inhuman treatment." The victims, he said, were abused mentally and physically, "with all sorts of pressure."

Most of the victims were nabbed off the street by some of the suspects under the guise of giving them treatment for alcoholism or drug addiction, the attorney general said.

A few of the victims were brought there by family members who thought their loved ones would receive addiction treatment.

The facility has a sign in front identifying it as Hospital Santo Tomas, Los Eligidos de Dios, which means "St. Thomas Hospital, Those Chosen by God."

Up to 300 people may have been incarcerated at the facility in recent months, Mancera said. Officials believe that thousands more could have suffered the same fate in the eight years the hospital has been open.

Some of the victims were released at the end of six months, when they were too ill or infirm to continue working, and new recruits were brought in.

Authorities now are looking at other treatment facilities.

"I am sure this will lead to other investigations and perhaps action by other authorities," Mancera said.

The investigation into Hospital Santo Tomas started in September, when a man was abducted while unloading a truck at a commercial establishment. Officials got a break in the case when one of the men held at the hospital escaped and told authorities what was happening at the facility.

Among those arrested Thursday were the facility administrator, Jose Antonio Villa Ramos, and the man accused of leading the abductions, Javier Rosales Garcia, known as "El Tato," Mancera said.

Political analyst and TV commentator Ana Maria Salazar described the case as "quite shocking," even by Mexican standards.

A recent study, she said, found that human trafficking gangs kidnap about 10,000 people a year in Mexico. Many of those victims, Salazar said, are from remote parts of the country or are migrants trying to cross Mexico to get to the United States.

The study's tally may be high, she said, but even 5,000 victims a year would be "a very high number of kidnappings."

"There's much more going on that we don't see," Salazar said. "This gives you a sense that there's a lot of stuff going on in Mexico."

Andrew Selee, director of the Woodrow Wilson Center's Mexico Institute, said the abductions are another sign of the nation's serious problems.

"Mexican society is becoming increasing aware of the multiple faces of organized crime and its impact on citizens' everyday lives," he said. "We're all focused on the drug cartels and drugs, and there's a lot of this stuff that goes on."

Forced labor is a global issue, with an estimated 12.3 million people forced into such situations, said Joanna Ewart-James of the organization Anti-Slavery International. Forced labor can be found in both the agricultural and manufacturing sectors.

Many of the people forced into slave labor are poor and dispossessed, Ewart-James said. Indigenous people, such as the victims in Mexico, are a common target.

"We know indigenous people are particularly discriminated against," she said. "It's much easier to exploit them."

Latin America accounts for the second largest number of forced laborers in the world, after Asia, the United Nations International Labour Organization said in its 2009 report on the issue.

"Those most at risk are migrant workers in sweatshops, agriculture and domestic service," the agency said. "The main form of forced labor is through debt bondage, involving informal and unlicensed intermediaries who pay advances to entice workers and then reap profits through inflated charges.

"Forced labor in Latin America is closely linked to patterns of inequality and discrimination, especially against indigenous peoples."

About 80 percent of forced laborers work for private companies. The remaining 20 percent work for state enterprises such as are found in China, North Korea and Myanmar, she said.

"Many of them make the goods and products that we buy," Ewart-James said.

Most garments and other domestic goods made by forced laborers, she said, are manufactured in six nations: China, India, Thailand, Malaysia, Jordan and Argentina.

Ewart-James said Anti-Slavery International, which is based in London, England, defines forced labor as "work or service that is exacted from any person under the menace of any penalty for which the worker does not offer himself or herself voluntarily."

Those conditions even exist in the United States, says the International Labour Organization.

"Slaves are all around us, hidden in plain sight: the dishwasher in the kitchen of the neighborhood restaurant, the kids on the corner selling cheap trinkets, the man sweeping the floor of the local department store," the U.N. agency says in a recent book, "The Slave Next Door: Human Trafficking and Slavery in America Today."

The case in Mexico does not fit the typical mold, Ewart-James said.

"It's unusual that people in forced labor are found like that in Mexico: with bars and chains," she said. "We associate that with historical slavery."

Some governments, such as in Brazil, are taking a tough stance against slave labor. A special government task force established there in 1995 says it freed 4,634 workers last year in 133 raids on large farms and businesses that rely on workers driven to take those jobs by hunger and the empty promises of labor recruiters.

Brazil's Special Mobile Inspection Group consists of labor inspectors, federal police and attorneys from the federal labor prosecution branch. The group often raids workplaces looking for abuses and laborers held against their will.