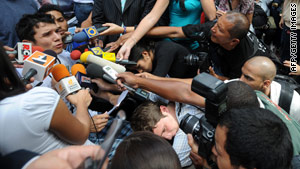 (CNN) -- Twenty-one Venezuelan students and supporters on Tuesday ended an 18-day hunger strike over the government's treatment of what protesters call political prisoners.

The students called off their strike after a visit by a three-member delegation from the Organization of American States who traveled from Washington to talk with them. OAS Secretary General Jose Miguel Insulza had written a letter to the protesters last week asking them to stop the fast.

Hunger striker Julio Rivas announced an end to the protest Tuesday, saying the visit by the OAS delegation had helped the students accomplish their goal of having an international body focus on the issue of political prisoners in Venezuela.

"This only a step," Rivas said. "We will keep taking steps."

Thirteen students and three members of a human rights group had been striking at the OAS office in Caracas, Venezuela's capital, said Marco Aurelio Quinones, a protest organizer. Four students and a professor were striking in three other cities.

The OAS delegation that visited the strikers was led by Antonia Orreogola, assistant to Insulza. Joining her were Rodrigo Zubieta from the OAS and physician Rodrigo Hurtado.

"We simply came here to hear what the hunger strikers have to say, to hear their demands," Orreogola said after the visit.

The OAS delegation was scheduled to return to Washington later Tuesday to report to Insulza, Orreogola said. Insulza was expected to make a statement afterward.

The protesters allege the leftist government of Venezuelan President Hugo Chavez is persecuting nearly 40 people for their political beliefs.

Some of the prisoners have been held for long periods without trials or during proceedings that have dragged on for months and even years, the protesters and other government critics say. Other prisoners have received harsh sentences under questionable charges, the protesters say. Many of the detainees are held at the secret police headquarters rather than a prison.

Chavez critics have compiled lists of who they consider political prisoners. Most of them are journalists and former military and police officials and others associated with a short-lived coup against Chavez in April 2002.

One of those cases involves former Metropolitan Police commissioner Ivan Simonovis, who is accused of being responsible for the deaths of protesters on the day of the coup. Simonovis complained in a letter to the European Parliament this year that he was held for four years and six months without being charged, and that his trial lasted three years. He was sentenced to 30 years.

Simonovis, who interceded to separate pro-Chavez crowds from opposition marchers, was one of three police commissioners charged in the killings in the weeks after the coup. Pro-government gunmen filmed firing into the opposition crowd went free.

The arrests came at a time when the central government was systematically dismantling the Metropolitan Police, which been a heavily armed potential counterweight to the military.

"The persons filmed while shooting to the crowd moving towards 'Miraflores' palace on April 11th, 2002 are in full liberty," Sumate said. "But policemen who ordered protection for the crowd were charged for being the material liable persons of the events."

"They don't apply legal process codes to them," Welsch said. "Some have not even been charged. They are detained for too long. The sentences they receive don't have substance."

Venezuela's embassy in Washington declined to comment Monday and Tuesday, saying the ambassador was out of town.

Chavez has denied his government has incarcerated political opponents.

"In Venezuela," he said in a speech three years ago, "there are no political prisoners, but instead politicians who are imprisoned."

More recently, high government official Gabriela Ramirez was quoted as saying in October that talk of political prisoners are the result of "an interested campaign by some opposition sectors."

"Here in Venezuela, without a doubt, there are political prisoners," Welsch said.

"I don't think there's any question that Mr. Chavez is using his powers in ways that are pretty abusive, and arresting his opponents is one of them," Hakim said.

Miguel Tinker Salas, author of the recently published "The Enduring Legacy, Oil, Culture and Society in Venezuela," is not so sure.

"The government claims they are criminals. The opposition claims they are political prisoners. They have become a continuous bone of contention," said Tinker Salas, a history professor at Pomona College in California who has been allied with the liberal Council on Hemispheric Affairs policy institute in Washington.

Jennifer McCoy, director of the Carter Center's Americas Program, also sees ambiguity on the question of whether the prisoners are held for political reasons.

"There are disputes in Venezuela whether there exists political prisoners or not," McCoy said. "Certainly, there are still concerns by outside groups and journalists."

Amnesty International's 2009 "Report on Human Rights in Venezuela" noted some of those concerns.

McCoy sees a "chilling effect" in the government's actions.

Some government opponents say there's no doubt that some Venezuelan prisoners are being held for political reasons.

"'Political prisoner' is being defined as those being held for more than two years without a trial," said Diego Arria, the Venezuelan ambassador to the United Nations from 1991 to 1994 and an assistant U.N. secretary-general from 2002 to 2008.

Human Rights Watch, an independent global organization, said last year that Chavez has shown an "open disregard for the principle of separation of powers ... specifically, the notion that an independent judiciary is indispensable for protecting fundamental rights."

"In the absence of credible judicial oversight," Human Rights Watch said in a 230-page report, "the Chavez government has engaged in often discriminatory policies that have undercut journalists' freedom of expression, workers' freedom of association and civil society's ability to promote human rights in Venezuela."

In July, the rights group harshly criticized a proposed law on "media crimes" that would mandate up to four years in prison for anyone who uses news outlets to provide "false" information that "harms the interests of the state."

"What we are witnessing is the most comprehensive assault on free speech in Venezuela since Chavez came to power [in 1999]," said Jose Miguel Vivanco, Americas director at Human Rights Watch. "With the exception of Cuba, Venezuela is the only country in the region that shows such flagrant disregard for universal standards of freedom of expression."

Critics point to numerous examples: Pro-Chavez mobs have roughed up journalists, stolen their equipment and attacked the offices of media outlets -- including Globovision TV and two newspapers, El Carabobeno and Notitarde. The attacks have been carried out without apparent fear of punishment from law enforcement authorities.

The Inter-American Commission of Human Rights, an independent arm of the Organization of American States, said in August it "is deeply concerned about the deterioration of the situation of freedom of expression in Venezuela. Since 2000, the IACHR has observed a gradual deterioration and restriction on the exercise of this right in Venezuela, as well as a rising intolerance of critical expression."

Engineering student Raul Jose Diaz Pena is one of them. Diaz Pena was arrested in February 2004 on charges that he bombed the Colombian consulate and the Spanish trade office in Caracas one year earlier. He had been one of hundreds of Venezuelans who had attended anti-government demonstrations at the time of the bombings. His supporters say the government persecuted people who frequented the Plaza Altamira, the site of the demonstrations.

His trial, which started three years after his arrest, lasted a year. He was sentenced in 2008 to nine years and four months in prison.

Diaz Pena asked the Inter-American Commission for Human Rights to take up his case on the grounds that the judicial proceedings violated his rights. He also complained that he is being held under inhumane conditions at the nation's secret police headquarters and being denied medical attention for his worsening health.

The Venezuelan government denied in a statement to the commission that Diaz Pena's incarceration is inhumane.

The commission agreed in March to take up the case, saying that Diaz Pena's "allegations concerning preventive detention and the alleged victim's conditions of detention could constitute possible violations of the rights to humane treatment, personal liberty, fair trial, and judicial protection."

Another case involves journalist Gustavo Azocar, who in 1988 challenged the government's claim that 14 people killed along the border with Colombia were guerrillas. Azocar reported they were peasants killed in a government training mission. His reports led the Inter-American Commission for Human Rights to investigate and order the government to pay restitution to family members.

Azocar, a radio and TV reporter and blogger, became a vocal Chavez critic after Chavez came to power in 1999.

The journalist was arrested in March 2006 on charges related to an advertising contract with the state lottery he assigned in 2000. He was released 10 days after his arrest but was picked up again in July 2009 and held without bail.

A judge ordered a new trial in October and said Azocar would be held in custody for the duration. The previous judge had held 28 hearings on the case and only had one more witness to interview, the Committee to Protect Journalists said.

Azocar's defenders say the new trial was ordered to keep him behind bars for at least another six months. A judge denied his release on bail last week.

"The proceedings against Gustavo Azocar are not officially linked to his work, but this case has suspicious flaws," Reporters Without Borders said in October. "The fraud case was never proved and yet he remains in custody."

Maracaibo Mayor Manuel Rosales, who ran against Chavez for president in 2006, sought asylum in Peru in April after he was charged with what he claims were trumped-up corruption allegations.

That same month, former Venezuelan Defense Minister Raul Baduel, who had played a key role in turning back the 2002 coup, was arrested on corruption charges. Baduel had turned against Chavez in November 2007 over constitutional changes the president was proposing.

Caracas opposition official Richard Blanco, whose job involved overseeing public order, was arrested in August on charges of using violence during a protest. He has been denied bail, and his supporters say he is jailed in an infamous facility with common criminals who might injure or kill him.