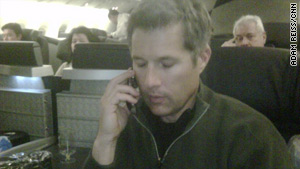 David Goldman has been locked in a legal battle over custody of his 9-year-old son, Sean.
STORY HIGHLIGHTS
RELATED TOPICS

(CNN) -- A Brazilian Supreme Court decision in an international custody battle was delayed until Tuesday, said Orna Blum, a spokeswoman at the U.S. Embassy in Brasilia.

David Goldman has been locked in a legal battle over custody of his 9-year-old son, Sean, with the family of the boy's deceased mother.

Last week, a lower court unanimously upheld a decision ordering that Sean be returned to his father in New Jersey.

David Goldman arrived in Rio de Janeiro, Brazil, to be reunited with his son, but one of the justices issued a stay, ordering Sean to remain with his Brazilian relatives until the high court could consider the case.

On Sunday, Brazilian Chief Justice Gilmar Mendes said he would make the final decision on Monday.

The custody battle began in 2004, when Goldman's wife, Bruna Bianchi, took their then 4-year-old son from their home in New Jersey to Rio de Janeiro for what was to have been a two-week vacation. She never returned. Instead she remarried there and retained custody of Sean. She died last year in childbirth.

Goldman has argued that as the sole surviving parent, he should be granted custody.

The Bianchi family argues it would traumatize Sean to remove him from what has been his home for five years.

"Once we stop cooperating and start breaking our treaties and international obligations, Brazil risks the chance of not having its own requests in the matters regarding international judicial help granted, based on the principle of international reciprocity," Adams said Monday.

"Not releasing the minor into the custody of his father could bring sanctions against Brazil," he added. "It could damage Brazil's image before the international community."

The Bianchi family, which has invited Goldman to spend Christmas with them, has prepared the necessary paperwork to file an appeal immediately if the court finds against them.