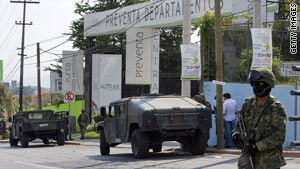 Mexico City, Mexico (CNN) -- Four suspected drug cartel members have been arrested in connection with the slaying of a family in what authorities call an act of revenge for the death of a drug baron, a state attorney general said Wednesday.

The shootings early Tuesday that led to the deaths of four family members of 3rd Petty Officer Melquisedet Angulo Cordova was an act of revenge carried out by Los Zetas, a drug cartel allied with the Beltran Leyva cartel, said Rafael Gonzalez Lastra, attorney general for the southern Mexican state of Tabasco.

The suspects were arrested Tuesday night, he said.

Cordova was killed in the December 16 shootout that resulted in the death of Arturo Beltran Leyva, nicknamed the "boss of bosses," during a raid by a Mexican navy contingent at an upscale resort condo in Cuernavaca, Mexico.

Angulo Cordova was hailed as a hero by President Felipe Calderon and laid to rest in his home state of Tabasco.

The Zetas, the protection arm of the Gulf cartel that also operates as its own trafficking organization, carried out revenge killings because of an alliance between them and the Beltran Leyva group, Gonzalez Lastra said.

Two of the arrested cartel members were responsible for the payments for the killings, and two acted as lookouts during the incident, he said.

Gonzalez Lastra said authorities know the identities of the shooters as well as the vehicles used in the attack.

Some local police officers were also involved, he said.